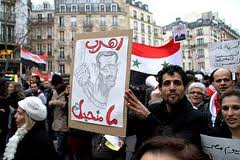 A 12-year-old boy, Rateb al-Orabi, was killed when security forces fired on protesters in the Shammas neighborhood in Homs, according to the activists

“Our revolution is strong! Assad has lost legitimacy!” protesters chanted in the Damascus suburb of Zabadani, according to video posted on YouTube.

The military crackdown has failed to silence a pro-democracy movement that has now lasted more than 100 days. The Syrian opposition says at least 1,400 people have been killed in the continuing government crackdown.

An eyewitness in Homs said protests took place in every city district Friday. He said hundreds of security personnel had been brought in by bus since early morning and encircled the city’s center.

The witness said security forces fired smoke grenades in the Jouret al-Shiyeh district to disperse protesters. He said pro-government thugs converged on Homs neighborhoods from neighboring villages and were “provoking” protesters, who began blocking roads with rocks to keep them back. He spoke on condition of anonymity for fear of reprisals.

The Syrian regime blames foreign conspirators and thugs for the unrest, but the protesters deny any foreign influence in their movement, during which they say authorities also have detained 10,000 people.

The protests, which have occurred every Friday after weekly Muslim prayers, come as Syrian refugees stream across the border to safe havens in Turkey and Lebanon to escape the violence. More than 1,500 Syrian refugees crossed into neighboring Turkey on Thursday alone, boosting the number sheltered in Turkey to more than 12000

International condemnation on Damascus was mounting steadily. The European Union announced Thursday it was slapping new sanctions on the Syrian regime and U.S. Secretary of State Hillary Rodham Clinton said the movement of Syrian troops right up to the Turkish border could prove dangerous, as concerns of possible confrontations grew.