Ali: The success of the cabinet would benefit Syria 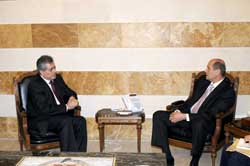 The Syrian Ambassador to Lebanon Ali Abdul Karim Ali said on Thursday following talks with Interior Minister Marwan Charbel that the new government has met the demands of the Lebanese people adding its success would benefit Syria.

Asked to comment on March 14 accusations that the new cabinet belongs to Syria and Hezbollah, he said: “The statements of President Michel Suleiman, Prime Minister Najib Miqati, Speaker Nabih Berri, and all our brothers in Lebanon are a response to such allegations.”

Lebanese Forces leader Samir Geagea told Voice of Lebanon on Thursday that the opposition will use all available democratic means to topple the newly-formed cabinet.

“The opposition’s decision stems from the fact that this cabinet which is under Hezbollah and Syria’s influence is seeking to isolate Lebanon on the Arab and international levels which is very dangerous for our country.”

Addressing the anti-regime protests in Syria, Ali reiterated what the Syrian president said during his last speech calling them part of the conspiracy against Syria

“Syria and Lebanon are doing well and the region will emerge stronger once these matters are resolved,” he added.

The males only cabinet which was announced by PM Nagib Mikati on June 13 was formed 72 hours after MP Walid Jumblatt returned from talks with Syrian president Bashar al Assad signaling a green light from the Syrian authorities . MP Talal Arslan resigned hours after the cabinet was formed but yesterday Assad summoned him reportedly to convince to remain in the cabinet