by yalibnan
2397
For the young Syrians who are key players in the uprising, president Assad failed in his Monday speech to recognise the new politics they represent.
Share: 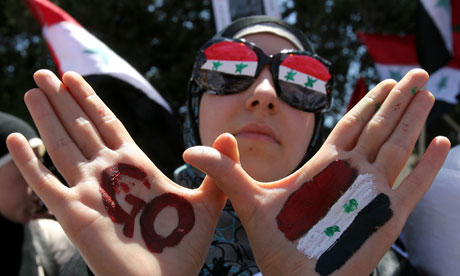 There are many reasons why Bashar al-Assad’s speech on Monday did not strike a chord with the opposition. The Syrian president spoke of conspiracies, saboteurs and vandals, declaring that there could be no compromise with those who “are terrorising the people”.

For the young Syrians who are key players in the uprising, Assad failed to recognise the new politics they represent. The local co-ordinating committees, run largely by youth activists, issued a statement rejecting his idea of a national dialogue as long as demonstrations are violently suppressed.

At the heart of the protest movement is the goal of putting an end to the rule of the security services. Security oversight of political life entails extensive monitoring and surveillance of gatherings and speeches in public and virtual space. All high-ranking positions are vetted by security.

The president’s strategy has been to co-opt traditional representatives – elders and heads of clans – in pacifying their constituencies. At the same time that the security services were rounding up cyber activists, demonstrators and members of the old opposition, the regime propagated the idea that it was engaging in a dialogue with its opponents. Its choice of interlocutors remains confined to traditional community representatives and a few handpicked dissidents – who have now clearly stated that they too refuse to enter into dialogue under fire.

For the young activists, some of whom I interviewed recently in Damascus, the uprising has been about reclaiming the country from the ruling clique; transcending ethnic and sectarian divisions that the regime has manipulated to maintain its power; and forging a national identity tied to rights and obligations of citizenship. The movement includes many who, at a very young age, took part in the civil forums of the Damascus spring of 2000, or have political activists or prisoners of conscience in their families. It began with small acts of solidarity with Egypt and Tunisia, in particular candlelight vigils in which a few dared to gather in public places despite the menacing presence of security personnel.

This movement has spread geographically and gained in numbers. Throughout the country, small acts of resistance – evening protests, sit-ins in public squares and women-only home sit-ins – build up every week to the outpouring of anti-regime sentiment after Friday prayers. Participants and leaders come from all sects and include men and women. They maintain regular communication, exchange experiences of local organising and hold virtual debriefing sessions to assess their methods and approach.

In addition to organising and co-ordinating protests, young people have expressed resistance to the regime through an extensive body of artistic work and an expanding counter-culture. In posters, slogans, songs, animation and comedy, they have sought to provide an alternative to the regime’s monopoly of the media and its aggressive occupation of the public space.

They have also been conscious of the need to counter the official media’s representation of the uprising as the work of armed gangs, Salafi extremists and foreign infiltrators. A poignantly worded song by the group the Infiltrators mocks the regime’s branding of young people as infiltrators, reminding us that, in fact, they are all just Syrians. In the face of claims about conspiracies and plots, the young have clearly articulated a rejection of any foreign intervention. As with their official statements, their cultural expressions assert their determination to preserve the uprising’s peaceful, non-sectarian character.

In contrast to the stultified politics of the regime, the protest movement is showing growing political maturity. In its geographical reach and through the solidarities created in the organising of a national movement, the siege of one city prompts another to come out. Syrians are coming to know their country more intimately by seeing it through a map of protest in which places such as Baba Amr and Bab Siba’i in Homs speak to other locales suffering army sieges, such as Deraa and Tel Kalakh.

Indeed, a new map of Syria drawn up to mark the protests on Fridays shows the remaking of the geography and the politics of the country. In this sense, the uprising could be viewed as the second coming of the Syrian nation.