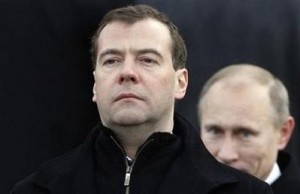 Russian President Dmitry Medvedev dismissed talk of a deepening rift with Prime Minister Vladimir Putin in remarks published Monday, strongly hinting they would not run against each other for president next year.

In a Financial Times interview, he also said he hoped Barack Obama, who has helped improve Russian-U.S. ties, would win a new term as U.S. president next year.

Medvedev, steered into the Kremlin by Putin in 2008 when he was barred from a third straight term, has made veiled criticism of his predecessor and emphasized the need for change, stoking speculation of growing discord ahead of the March 2012 election.

In what many investors saw as a campaign speech Friday, he warned against one-man rule and hinted that the stability Putin boasts of bringing to Russia could lead to stagnation.

But in the Financial Times interview conducted the next day, Medvedev said he and Putin were “different people” with different ideas about how to reach some goals, but were on the same side.

“To believe some sort of rift is deepening between us is absolutely wrong,” he said, according to a Kremlin transcript.

He sounded less combative than on some occasions, when he has targeted Putin by criticizing his cabinet. While he said Russia needed more political plurality, he made clear he advocated only gradual change in electoral legislation.

“I do not think that disagreements between us are growing,” Medvedev said.

He repeated a promise to announce soon whether he would run for a new term — six years this time — and suggested he wanted to do so, saying that “any leader who is in a position such as president is simply obliged to want to run.”

“Whether he will take this decision or not is another question,” he added.

Many analysts, however, believe it is Putin who will decide whether to return to the country’s top job or endorse his protégé for a second term. With a marginalized opposition, either one would be likely to win.

There has been speculation that Putin and Medvedev could break the unwritten rules of their “tandem” leadership and run against one another, but Medvedev said that “probably would not be the best scenario for our country.”

“It is hard to imagine that for one reason at least. The thing is, Vladimir Putin and I, after all, to a significant degree represent one and the same political force,” he said.

“Competition between us could undermine the tasks and the aims that we have been realizing in recent years.”

Medvedev sounded far less equivocal about the U.S. election in November 2012, praising Obama and accusing some of his opponents of turning Russia into a scapegoat.

“There are representatives of a very conservative wing who are trying to resolve their political tasks in part by whipping up passions about Russia,” he said.

He suggested a Republican victory could chill ties after a period that included the signing of a new nuclear arms reduction pact and U.S. support for Russia’s bid to join the World Trade Organization.

“I would like Barack Obama to be elected to the office of president of the United States a second time,” he said.