Geagea: Lebanon was better off without a cabinet 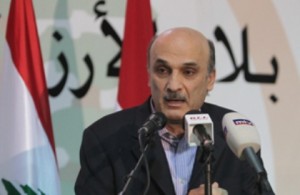 Lebanese Forces leader Samir Geagea said on Wednesday during a press conference at his residence in Maarab that, lebanon was better off than the newly-formed cabinet, in its current shape which he called it ” dangerous for Lebanon” and does not represent the Lebanese people.

“It would have been better for Lebanon to remain without a cabinet rather than having a controlled cabinet dating back to the Stone Age,” he said in reference to Hezbollah and its backers Syria and Iran

“This cabinet is contradictory to what is happening in the region; it puts Lebanon outside the Arab countries’ bloc.”

The LF leader criticized members of the new cabinet, saying that Health Minister “Ali Hassan Khalil is a good politician, but not qualified to replace a successful doctor,” a reference to former Health Minister Mohammad Jawad Khalifeh.

He added that Labor Minister Charbel Nahhas who should have been kept in his previous post in the Telecommunications Ministry “if he succeeded or removed from the cabinet if he didn’t.”

Geagea also said the new cabinet is unconstitutional due to the absence of Sunni representation, adding that Christians are represented by less than half of their political parties.

On the issue of Sunni representation he is meaning Beirut and the Beqaaa region , since most of the Sunni ministers are from Tripoli.

On the issue of Christian representation most of the Christian ministers are from MP Michel Aoun’s FPM which received less than 45 % of THE Christian votes during the last elections.

Prime Minister Najib Mikati announced the formation of the new Lebanese cabine on Monday after almost five months of deliberations within the March 8 parties.

The Iranian- and Syrian backed Hezbollah brought down PM Saad Hariri’s government on January 12 over the Special Tribunal for Lebanon’s (STL) imminent indictment which is widely expected to implicate Hezbollah members and possibly Syria, in the assassination of former PM Rafik Hariri in 2005

Mikati was appointed in January as the PM designate with the backing of the Hezbollah March 8 alliance and MPs Walid Jumblatt and Mohammad Safadi . March 14 leaders have repeatedly said that intimidation from Hezbollah’s weapons helped secure the parliamentary majority for Mikati’s nomination and refused to join the government.