Syria: Hundreds flee to Turkey for fear of reprisals 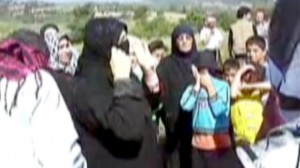 Hundreds of civilians fled towards Turkey last night, fearing a massacre after Syria’s Baathist regime vowed to respond “decisively” to claims that 120 members of the security forces were killed by armed groups in the north-western borderlands.

The threat by President Bashar al-Assad’s government came after state television reported that the Syrian security service had come under attack on Sunday in the town of Jisr al-Shughour, 12 miles from the Turkish border.

One resident yesterday described Jisr al-Shughour as being like a “ghost town”. “They are afraid the army will invade the city,” the man said. The “armed groups” described by Syrian state television were disaffected soldiers who had turned on government forces, he said.

According to the Turkish foreign ministry, 224 Syrians were yesterday sheltering at a camp near the border.

In another sign of the 40-year regime’s weakening grip on power, the Syrian ambassador to France resigned last night. Lamia Chakkour announced her resignation on France 24 television, with the channel saying she denounced the violence in Syria and no longer wanted to represent Damascus in France.

Human rights groups say that at least 42 people have been killed in Jisr al-Shughour since Saturday, in clashes between demonstrators and the security services after a funeral.

Syria’s insurrection has been gathering momentum since protests began in the southern city of Deraa 11 weeks ago, after the arrest of a group of schoolboys. Human rights groups say more than 1,300 people have been killed and many thousands more arrested and tortured.

Jisr al-Shughour is no stranger to violent government reprisals. Long known as a stronghold of the Muslim Brotherhood, it was shelled in 1980 during the campaign waged against the Islamist organisation by President Bashar al-Assad’s father.

Update : A security source in Lebanon told AFP that 3 wounded Syrians were transferred to Lebanon for treatment , but one of them died.