Dr. Walid Georges Gholmieh died at the age of 73 after a long battle with illness, National News Agency reported on Tuesday. 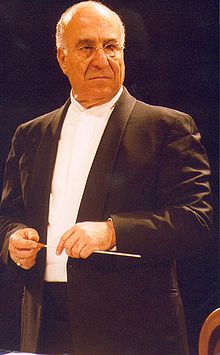 Gholmieh was the director of the Le Conservatoire libanais national supérieur de musique or The Lebanese National Higher Conservatory of Music. He was considered one of the most prominent Middle-Eastern conductors and composers. Born in Marjeyoun, Lebanon, he initially studied Mathematics at the American University of Beirut before dedicating his education and life to music.

Established in 2000, the Lebanese National Symphony Orchestra, under the leadership of Dr. Gholmieh was able to prove itself both locally and regionally. In a period of 25 months, the Orchestra presented more than 60 performances in different cities, including a varied international repertoire by world-renowned classical music composers.

He has also headed the panel of judges on the Lebanese, television talent show, “Studio el Fan,” which is credited for launching the careers of many Lebanese and Arab artists.

Dr. Gholmieh composed the Iraqi national anthem, “Ardulfurataini Watan” (Land of Two Furat Rivers) that was in use from 1979 until 2003.

Walid Gholmieh, was featured on the latest album by Damon Albarn’s virtual band, Gorillaz. The album, ‘Plastic Beach,’ was released on March 9 2010,With a track called White Flag.