Patriarch Rai: THe Lebanese president should have more power 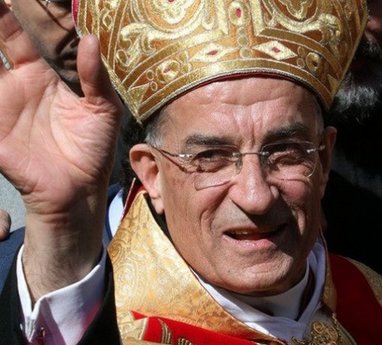 Maronite Patriarch Bechara Boutros al-Rai said on Monday that the 1989 Taif Agreement “is not a holy document that descended from heaven.”

After holding talks with Change and Reform bloc MP Nematallah Abi Nasr he said: “We don’t mind change and if we needed a new agreement, then why not.”

“We all accepted the Taif, but the agreement has flaws and needs to be reformed,” Rai was quoted by the National News Agency as saying.

He said that Lebanon’s president –who is supposed to be a Christian Maronite according to the Taif –should be granted more powers.

“We are with the equal division of shares between Christians and Muslims but we do not support it when the president has no power to make a decision,” the patriarch added.

“Is it logical that every time we want to elect a new president or form a cabinet, the parliament’s doors are closed and we wait for a decision from outside Lebanon ?” He asked

He called on “all Lebanese people to bear responsibility,” adding that the participation in the rule between the country’s sects “was not a real one.”

“The PM or the parliament speaker are the ones ruling instead of the cabinet as a whole, while the president powerless .” he said

Rai also said that the electoral law of parliamentary elections “is the original sin.”

“We must not draft electoral laws based on the will of the political leaders,” Rai said, calling for drafting a new electoral law “in order to ensure the best degree of representation.”

The Taif Agreement (also known as the “National Reconciliation Accord,” or “Document of National Accord”) was an agreement reached to provide “the basis for the ending of the civil war and the return to political normalcy in Lebanon.” Negotiated in Taif, Saudi Arabia, it was designed to end the decades-long Lebanese civil war, politically accommodate the demographic shift to a Muslim majority, reassert Lebanese authority in South Lebanon (then occupied by Israel), though the agreement set a time frame for Syrian withdrawal and stipulated that the Syrians withdraw in two years. It was signed on October 22, 1989 and ratified on November 4, 1989.

The accord also transferred some of the power away from the Maronite Christian community to the PM and Speaker. The Speaker in Lebanon is a Muslim Shiite, the PM is Muslim Sunni while the president is a Christian Maronite