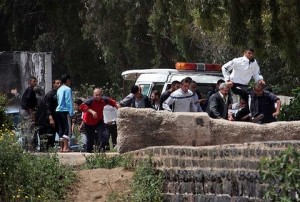 IN A vacant shop the size of a shipping container in the northern Lebanese village of Buqaya, 12 men aged 15 to 63 have gathered mattresses, a gas jet to brew coffee, and a TV set.

”Our homes are over the river,” says Salem Abu Hassan, pointing to the Syrian village of Aarida just a few hundred metres across the Lebanese border.

”We are here because we fear for our lives.”

Over the past 10 days, Mr Abu Hassan and his room-mates have waded one by one across the Kabir River, fleeing the bloody chaos that has gripped Syria since democracy protests erupted in April.

With an estimated 900 civilians shot dead by forces loyal to dictator Bashar al-Assad, Mr Abu Hassan is one of about 5000 Syrians now seeking political asylum in Lebanon. Most of the men sitting in the semi-circle with Mr Abu Hassan are also small businessmen, none of whom are prepared to give their full names for fear of retribution.

Abu Samer says he runs a butcher shop in Aarida, Ahmed is a mobile phone retailer, another man owns a mini-market.

A man who calls himself Sami al-Annas identifies himself as one of the organisers of the protests in Aarida. The owner of a fruit and vegetable stall, Mr Annas says he built support for the democracy movement among his neighbours.

”I started going from store to store, house to house, asking people to get involved,” he says. ”We are too small, too remote for Facebook here, it was all by word of mouth.”

When the Syrian army began shelling the nearby city of Tel Kalakh, Mr Annas said that was all the encouragement he needed. ”The people in Aarida decided not to back down, people were very brave. We risked our lives and we went out on to the streets.

”I saw two people killed in Aarida, in Tel Kalakh we believe around 30 people were killed on May 16.”

Across the border, Syrian troops can be seen patrolling the river banks, while inside Aarida several sniper positions can be seen clearly.

”I don’t mind if you take a photograph,” says a plain-clothed Lebanese security officer standing guard by an unofficial border crossing. ”But it is possible they will shoot you.”

According to Ahmed Akkari, the deputy mayor of Lebanon’s Mqaible municipality, the situation is extremely volatile.

”Our official count is around 3500 Syrian refugees so far in the valley. But it may well be more than that. Our main role has been to co-ordinate shelter and food. But this is not a place [where] we can begin to provide employment or financial assistance,” Mr Akkari says.

Buqaya resident Hana Hamzeh works as a volunteer for the Qatar Red Crescent Society, the most active non-government organisation in the valley. ”We have mostly been distributing hygiene kits, nappies, powdered milk, limited medical assistance and bedding,” she says.

Back in Buqaya, Mr Abu Hassan and his friends seemed more intent on asking questions than answering them.

”We would like to know why the international community is prepared to intervene in Libya, but not here,” says Rami Taher, whose family owns a mechanic shop. ”Sanctions are not enough to defeat Assad. Only real pressure will make a difference.”