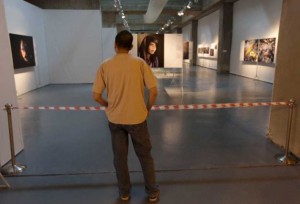 A World Press Photo exhibit in Beirut is shutting down early after Lebanese authorities ordered the removal of an Israeli photographer’s prize-winning work, an organizer of the exhibit said Friday.

“For a week it was no problem and then someone noticed that he is an Israeli photographer,” de Kruijf told The Associated Press. “We cannot allow censorship of any kind so that’s why we decided to take everything down.”

The World Press award is one of the industry’s most coveted prizes. 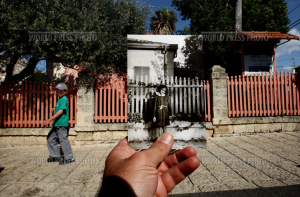 The photographs in question are by Amit Sha’al. They show various street scenes in Israel in which the photographer holds up historical photos of the same places in front of the camera in a juxtaposition of past and present.

Sha’al won the third prize in arts and entertainment stories and was among 60 winners whose work was being shown.

Sha’al said he was surprised by Lebanon’s decision and noted that the photos remained available for all to view on the Internet.

“Any Lebanese person can go on the Internet today and look what all the fuss is about. Hopefully they will,” he told The Associated Press in Jerusalem.

He said the photographs were not intended to be political. “It’s an examination of what was once and what is now. The viewer can reach his or her own conclusion,” he said.

One of the images, he noted, shows an Arab standing in front of a mosque in Haifa in 1941 and alludes to the story of the refugees who were driven out or fled during the war surrounding Israel’s creation seven years later.

“I have no intention of representing Israel or Israeli policies, many of which I oppose personally,” he said. “There are dark people on both sides of the fence.”

Lebanon and Israel, bitter enemies, are technically at war. Lebanon prevents Israeli citizens from entering the country and Israel bans its citizens from visiting “enemy” states.

Last year, two Israeli Arab authors who won literary awards in Lebanon were not able to collect their prizes in Beirut because of laws in the two countries.

A Lebanese security official said the General Security Directorate, which is in charge of censorship, ordered the exhibit’s organizers to remove Sha’al’s work because he is Israeli. In explanation, he noted the two nations are “in a state of war.” He spoke on condition of anonymity in line with regulations.

According to Sha’al’s website, he was born in 1974 and works as a staff photographer for the business daily Calcalist. He also works as an independent photographer on documentary projects.

By Friday afternoon, the main gate to the hall hosting the Beirut exhibition was roped off and staffers were seen removing the photographs from the room.