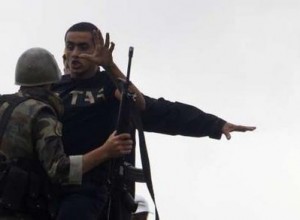 He also said Hezbollah still maintains strong presence in south Lebanon despite the presence of the UNIFIL forces and the Lebanese army .

The source ruled out any attempt by Iran to push Hezbollah to open a war front with Israel , “because such a venture is not guaranteed to succeed and won’t help the situation in Syria.” He said

White House press secretary Jay Carney said Monday such behavior on the part of Syria is unacceptable. He said it was intended to draw attention from the Syrian government’s violent crackdown on its own people who are pushing for reforms.

May 15 marked the “Nakba Day.” Nakba, meaning catastrophe in Arabic, and marks the period when more than 700,000 Arabs were displaced from their homes during the fighting following the creation of Israel in 1948.

Photo: Lebanese soldiers confront a Palestinian demonstrator as they disperse a protest engaged in clashes with Israeli soldiers in Maroun al-Rass near the Israeli border in south Lebanon May 15, 2011.