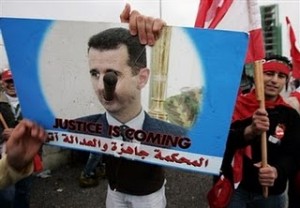 Michael Young, opinion editor of The Daily Star newspaper wrote in special article for CNN that the U.S. sanctions that have just been imposed on Syrian President Bashar al-Assad are useful, but not enough and the time has come to ask him to leave office

“Assad’s regime has lost all legitimacy. It cannot continue in power. Something is fundamentally broken in Syria, and the time has come to ask the president to leave office. The United States can, and must, put together a road map to bring about this outcome. Rather than focus on sanctions, in his Thursday speech President Barack Obama should call for Bashar al-Assad to step down. He demanded the same of Hosni Mubarak, who was responsible for killing far fewer of his own people.” Young wrote