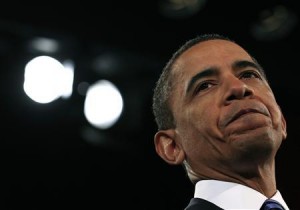 U.S. officials are analyzing one million pages of data from the trove found in Osama bin Laden’s compound during the raid that killed him, and say they have learned more in the past ten days than in the past 10 years.

Among the things they’ve learned is that the al Qaeda leader wanted to find a way to kill President Obama.

Meanwhile, the first revenge attack for the bin Laden raid has killed 80 outside a military training center in Pakistan, and President Obama has acknowledged that threats against his own grandmother from another al Qaeda group are being closely monitored.

In the Kenyan village where she lives, the president’s 88-year-old step-grandmother, Sarah Obama, shrugged off death threats against her from an al Qaeda affiliate in East Africa called al Shabaab.

“My life has not been affected in any way,” Sarah Obama told ABC News. “It has not restricted my movement.”

But President Obama seemed more concerned when asked directly about his grandmother by a Miami Spanish-language television station.

“There is no doubt that when it comes to the American people,” he told WLTV, “that after having killed bin Laden there may be a desire on some al Qaeda members to exact revenge and that’s something that we have to be vigilant about and we’re monitoring all these situations.”

The leaders of al Shabaab, which operates in war-torn Somalia on Kenya’s northern border, include an Alabama-born-and-raised 27-year-old named Omar Hammami who goes by the nom de guerre Abu Mansour al-Amriki, or Abu Mansour the American. The son of a white Southern Baptist mother and a Syrian Muslim father, Amriki grew up in Daphne, Alabama, near Mobile.

This week, Amriki, who is under indictment on federal terror charges in Alabama, was recorded issuing threats against the United States and President Obama.

“Today we remind Obama, and the rest of his cronies, that they have entered the wrong war,” said Amriki.

Bin Laden’s own writings discovered at his compound indicate he urged his followers to assassinate the President, and find ways to disrupt the 2012 American elections.

“I would say this is probably very personal on bin Laden’s part, to kill a President that he believes has violated the Muslim faith,” said Brad Garrett,” an ABC News consultant and former FBI profiler. “He is incensed, inflamed, obsessed about killing the President.”

In fact, the video of bin Laden watching television in his hideout shows that whenever President Obama came on the screen, bin Laden quickly tried to change the channel.

It was President Obama who got bin Laden first.

In Kogelo, Kenya, security has been increased around the home of President Obama’s step-grandmother.

Kenyan police told ABC News they are patrolling round the clock after the threat from Al Shabaab.

Sarah Obama has been protected ever since Obama became president, and security was added to her house the day after bin Laden was killed because of fear of reprisals. The number of patrolling officers has ballooned, however, since Al Shabaab’s threat was issued. One police chief told ABC News he now had enough officers “to patrol the entire village.” ABC