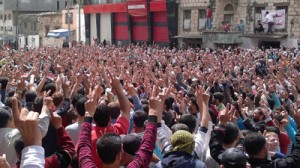 Syrian security forces have killed at least 19 people in two separate attacks in Homs and near Daraa, according to human rights campaigners.

At least 13 people were killed after tanks fired on Harra near the southern city of Daraa.

A further six people have reportedly been killed in a military operation in the Syrian city of Homs.

Najati Tayara said at least five bodies were taken to the National Hospital in the city after tanks shelled the Bab al-Amro district early in the morning.

The official Syrian news agency also said one soldier was killed “during the pursuit of armed terrorist gangs” in Bab Amro.

News of the deaths comes as Syrian army tanks move into and reportedly begin shelling residential areas as part of a continued crackdown on anti-government protesters.

There is an increasing military presence in southern villages near the heart of the country’s uprising and footage has begun to emerge, apparently showing brutality from members of its security forces.

One video, purportedly filmed in the capital, Damascus, shows men taking part in a seemingly peaceful march through a shopping centre being bundled into the back of a van.

They are then beaten by security officials thought to be operating for President Bashar Assad’s regime.

“As well as opening fire on large crowds, when it comes to small crowds, they get what they think are the ringleaders, throw them in the back of the van and they are then tortured, it is claimed, something Syrian authorities deny.”

Intense military operations have also taken place in the Damascus suburb of Maadamiyeh, which has been sealed off for days, according to activists.

Mr Tayrara said: “Homs is shaking with the sound of explosions from tank shelling and heavy machineguns.”

Syrian troops have been sealing off various areas in southern villages and conducting house-to-house raids in search of people whose names are on wanted lists.

A human rights group reported more than 750 people have been killed in the crackdown on protests, which started in the wake of uprisings in Middle Eastern countries Egypt and Tunisia.

And Ammar Qurabi, who heads the National Organisation for Human Rights in Syria, also said thousands had been detained in the past two months, including around 9,000 who are still in custody.

Although foreign journalists are not being granted visas to enter Syria, The Times’ reporter Martin Fletcher spoke to Sky News about making it into the country before being detained by security services.

” I was held for about six hours and all during this time young men were being brought in. Some were literally whimpering with fear, others were defiant.”

He reported seeing more than 100 tanks lining the streets of Homs and said he had “no sense that the regime was anywhere close to losing control”.

The official Syrian news agency claims two soldiers have been killed in clashes with armed gangs in the city.

Opposition supporters want to bring an end to the Assad family’s authoritarian rule over the country of more than 40 years.