Assad’s cousin says Syria will fight protests till ‘the end’ 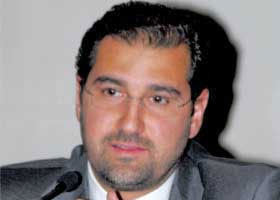 Syria’s ruling elite, a tight-knit circle at the nexus of absolute power, loyalty to family and a visceral instinct for survival, will fight to the end in a struggle that could cast the Middle East into turmoil and even war, warned Syria’s most powerful businessman, a confidant and cousin of President Bashar al-Assad.

The frank comments by Rami Makhlouf, a tycoon who has emerged in the two-month uprising as a lighting rod for anger at the privilege that power brings, offered an exceedingly rare insight into the thinking of an opaque government. Beset by the greatest threat to its four decades of rule, the ruling family, he suggested, has conflated its survival with the existence of the minority sect that views the protests not as legitimate demands for change but rather as the seeds of civil war.

“If there is no stability here, there’s no way there will be stability in Israel,” he said in an interview Monday that lasted more than three hours. “No way, and nobody can guarantee what will happen after, God forbid, anything happens to this regime.”

Asked if it was a warning or a threat, Mr. Makhlouf demurred.

“I didn’t say war,” he said. “What I’m saying is don’t let us suffer, don’t put a lot of pressure on the president, don’t push Syria to do anything it is not happy to do.”

His words cast into the starkest terms a sentiment the government has sought to cultivate — us or chaos — and it underlined the tactics of a ruling elite that has manipulated the ups and downs of a tumultuous region to sustain an overriding goal: its own survival.

Though the uprising has yet to spread to Syria’s two largest cities — Damascus, the capital, seemingly tranquil, was bereft of any military buildup this week, and Aleppo, a key conservative bastion, has been relatively quiet — the protests have unfurled across much of the rest of the country, building on longstanding neglect of the countryside and anger at corrupt and unaccountable security forces. While the government offered tentative concessions early on, it has since carried out a ferocious crackdown, killing hundreds, arresting thousands and besieging four cities.

“The decision of the government now is that they decided to fight,” Mr. Makhlouf said.

But even if it prevails, the uprising has demonstrated the weakness of a dictatorial government that once sought to draw legitimacy from a notion of Arab nationalism, a sprawling public sector that created the semblance of a middle class and services that delivered electricity to the smallest towns. The government of Mr. Assad, though, is far different than that of his father, who seized power in 1970. A beleaguered state, shorn of ideology, can no longer deliver essential services or basic livelihood. Mr. Makhlouf’s warnings of instability and sectarian strife like Iraq’s have emerged as the government’s rallying cry, as it deals with a degree of dissent that its officials admit caught them by surprise.

Mr. Makhlouf, a childhood friend and first cousin of Mr. Assad whose brother is the intelligence chief in Damascus, suggested that the ruling elite — staffed by Mr. Assad’s relatives and contemporaries — had grown even closer during the crisis. Though Mr. Assad has the final say, he said, policies were formulated as “a joint decision.”

“We believe there is no continuity without unity,” he said. “As a person, each one of us knows we cannot continue without staying united together.”

He echoed an Arabic proverb, which translated loosely, means that it will not go down alone.

“We will not go out, leave on our boat, go gambling, you know,” he said at his plush, wood-paneled headquarters in Damascus. “We will sit here. We call it a fight until the end.” He added later, “They should know when we suffer, we will not suffer alone.”

Mr. Makhlouf, just 41 and leery of the limelight, stands as both a strength and liability of Mr. Assad’s rule, and in the interview he was a study in contrasts — a feared and reviled businessmen who went to lengths to be hospitable and mild-mannered. To the government’s detractors, his unpopularity rivals perhaps only that of Mr. Assad’s brother, Maher, who commands the Republican Guard and the elite Fourth Division that has played a crucial role in the crackdown. Mr. Makhlouf’s name was chanted in protests and offices of his company, Syriatel, the country’s largest mobile phone company, were burned in Dara’a, the poor town near the Jordanian border where the uprising began in mid-March.

The American government, which imposed sanctions on him in 2008, has accused him of manipulating the judicial system and using Syrian intelligence to intimidate rivals.

Asked why he believed he was sanctioned, he replied, “Because the president is my cousin, or I’m the cousin of the president. Full stop.” He suggested that anger at him arose from jealousy and long-standing suspicions that he serves as the family’s banker.

“Maybe they are worried about using this money to support the regime,” he said. “I don’t know. Maybe. But the regime has the whole government, they don’t need me.”

He said he was aware of the anger, but called it “the price I have to pay.”

More than just an icon of outrage, Mr. Makhlouf represents broader changes afoot in the country. His very wealth points to the shifting constellation of power in Syria, as the old alliance of Sunni Muslim merchants and officers from Mr. Makhlouf’s Alawite clan gives way to descendants of those officers benefiting from lucrative deals made possible by reforms that have dismantled the public sector.

He serves as an instrument, too, in Mr. Assad’s vision of economic modernization, where Syria serves as a crossroads of regional trade and a hub for oil and gas pipelines that link Iraq and the Persian Gulf to the Mediterranean and Europe. Cham Holdings, a vast conglomerate with a portfolio of $2 billion, in which Mr. Makhlouf owns a quarter of the shares outright, is at the forefront of that faltering scheme.

Turkey’s recent anger at Syria’s crackdown has fed feelings of betrayal in the government because Turkey was viewed as a centerpiece in that vision. Concerns are growing, too, over the uprising’s economic impact, deepened by Syria’s growing isolation and flight of capital — a legacy that may very well prove more threatening to the government than the protests.

“This is a priority for Syrians,” he said. “We have to ask for economic reform before speaking about political reform.” He acknowledged that change had come late and limited. “But if there is some delay,” he added, “it’s not the end of the world.”

He warned the alternative — led by what he described as Salafists, the government’s name for militant Islamists — would mean war at home and perhaps abroad.

“We won’t accept it,” he said. “People will fight against them. Do you know what this means? It means catastrophe. And we have a lot of fighters.”