by yalibnan
861
On a campus where even a whisper of politics risks jail time some 150 budding doctors chanted in a rally around Damascus University “God, Syria, freedom only,”
Share: 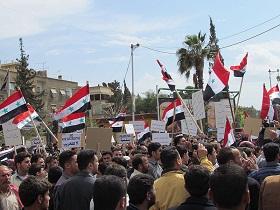 By: Hugh Macleod and a special correspondent

On a campus where even a whisper of politics risks jail time and where loyalty to the ruling party is rewarded with better grades and the best dorms, the small gathering of medical students, holding olive branches and flowers and dressed in bright white coats, were staging something truly revolutionary: A rally against the regime.

“God, Syria, freedom only,” chanted the group of some 150 budding doctors, their voices reverberating around the faculty buildings of Damascus University.

Outraged at the killing of more than a dozen protesters in the central city of Homs in just two days and with the army set to move into Daraa, the southern city where Syria’s popular uprising began, the students had dared the previously unthinkable.

The regime’s reaction was the same on campus as off it: Violent repression.

“God, Syria, Bashar only,” came the rhythmic chant, as around 500 members of the Students’ Union, run by the ruling Baath Party, slowly descended on the protesters. The call for freedom was drowned out.

“We tried to ignore them at first, but they kept coming closer,” said Mohammad, 22, one of the student protesters. “Then they began to beat us with wooden sticks and their belts.”

The white coats scattered, olive branches and flowers left to be trampled underfoot.

“We used to be afraid of the secret police, but now we are afraid of our friends who sit next to us or live with us in the same dorms,” said Mohammed, who like other students interviewed for this article declined to publish his full name, fearing retribution for speaking out. “It is a shame.” 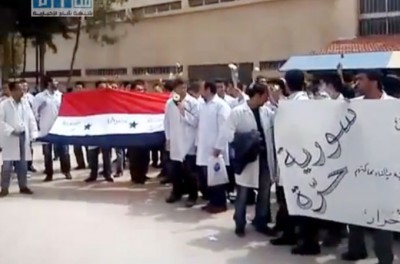 At the main gates of Damascus University students and teachers pass under the gaze of a towering statue of the late President Hafez al-Assad, draped in a university robe and holding a stack of books.

But in the one-party police state of the Assad dynasty, the campuses of Syria’s universities have long been places for smothering dissent, rewarding loyalty to the regime and for gathering intelligence on students as much as educating them.

“All new ideas come from the youth and therefore the university environment is even more controlled than the rest of Syria,” said Fadi, a 25-year-old student at Damascus University.

Human rights activists have documented dozens of cases of students arrested after speaking their mind on campus and being informed on by a fellow student to the Students’ Security department of the Union.

“Students report each other to the Union and in return they are offered privileges such as being allowed to stay out until late or better dorm rooms,” said Khaled, a former student of the university.

One of Syria’s leading cyber activists, profiled by GlobalPost last month, was in part motivated to join the opposition following the arrest and disappearance of his sister from Damascus University after she was heard questioning Assad’s effectiveness.

The principal route for the regime’s exercise of control over campus is through rewarding students if they join the ruling party and the Baath-run Students’ Union.

Upon enrolling at university, students are encouraged by their teachers to join the Baath Party itself. Membership guarantees students an instant increase in their grade points, a crucial boost for many hoping to enter the best faculties.

“Baathist students receive five to 10 grade points more than us so they can get into the better faculties,” said Mohammed, who did not join the ruling party.

Membership of the Students’ Union, run by Ammar Saaty, a Baath Party MP, while not compulsory, also brings many rewards.

“It is easier to get a room in campus if you’re a member of the Union. Otherwise you might have to rent a room in the city which costs a lot of money,” said Mohammed.

Members of the Students’ Union are rewarded when they inform on students suspected of not supporting the regime and, as was the case with the medical students’ protest, are often directly used to violently break up demonstrations.

A current student said the Union is now offering rewards to members who catch anyone filming at protests on campus: The successful agent gets to keep the mobile phone of the person caught and is given money.

“Now there are more than 300 secret police patrolling inside the university alongside members of the Students’ Union,” said Ahmad, a student at Damascus University. “They swear at people and if anyone answers back they will be beaten.”

While some concerned parents have kept their sons and daughters at home, other students have decided to boycott classes in protest.

Classes have been broken into by groups of thugs, said Ahmed, shouting “Long live Bashar!” and “There are traitors among us and we’ll kill you!”

In a chilling parallel to the crackdown on students in Iran during the Green Movement protests against the disputed re-election of President Mahmoud Ahmadinejad, Syrian secret police were sent into Damascus University to raid dormitories late last month.

“I saw two large buses full of plain clothes security pull up to the statue of Hafez al-Assad. The officers went to the dorms housing IT students and searched their rooms and arrested some of the students,” said Ahmad.

A representative of the Students’ Union, contacted by a reporter, refused to comment on the testimony of students that they had been beaten by members of the Union.

In a press conference, Minister of Higher Education Abdul Razzaq Sheikh Issa said, “It is not allowed for university students to demonstrate or stage sit-ins inside university buildings. If students have some demands they can talk directly to their faculty’s dean or to the university’s president.”

Khaldoun, a 21-year-old member of the Union and staunch supporter of the regime, said he had not participated in attacks on the protesters, but could understand why they had happened.

“Universities are for education, not for demonstrations. Without the Baath Party and President Assad none of us poor could get into university,” he said.

“Those students who are protesting are studying in the government’s buildings: No one eats from a dish only to spit in it. Everyone against the country and Assad should be punished.”

But for many students, the fear barrier that kept politics off campus for generations has fallen in a matter of weeks.

Since the attack on the medical students, a group calling itself “The University Students of Syria” issued an eight-point statement denouncing “acts of force and humiliation inflicted upon university students inside campuses by security forces.”

“We want freedom and democracy for all of Syria,” said Ibrahim, one of the students who drafted the statement.

“We want freedom of expression, the release of political prisoners, for political parties to be allowed and a free media. We are university students, but we are also Syrians: We feel and see what is going on in the country.”