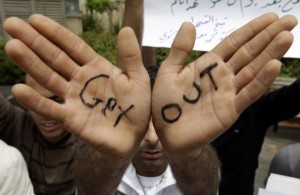 France urged any of its citizens living in or visiting Syria to leave Wednesday and warned others to cancel any plans to visit during the current political crisis, the foreign ministry said.

“While foreign citizens are not so far directly threatened, the French authorities renew their advice to delay all plans to travel to Syria,” the ministry said in advice to travellers on its website.

“And, until the situation returns to normal, we recommend that French citizens whose presence in the country is not essential or motivated by imperative reasons to provisionally leave Syria by commercial means.”

At the end of last year just over 3,000 French citizens were registered with the foreign ministry as being resident in Syria, which was administered under French mandate in the first half of the 20th century before independence.

The French energy giant Total has around 100 employees there, and French firms are involved in textiles and pharmaceuticals.

France has condemned Syrian President Bashar al-Assad’s bloody crackdown on anti-regime protesters, and is lobbying within the European Union and United Nations for sanctions to be imposed.

Protests erupted against the Syrian regime on March 15 in the wake of similar pro-democracy movements in other parts of the Arab world. The Insan human rights groups estimate the civilian death toll at more than 607. expatica

Photo: A Syrian protester shows his palms as he shouts anti-Syrian President Bashar Assad slogans during a sit-in in front of the U.N. house in downtown Beirut, Lebanon, Monday, May 2, 201