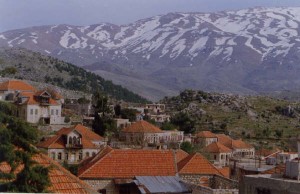 Free Lebanon radio station quoted witnesses in Rachayya province , which lies along the Syrian borders , as saying that the Syrian intelligence arrested eleven Syrian citizens and accused them of smuggling arms between Lebanon and Syria. A security source confirmed the arrests to the station but added that the those arrested were not only dealing with arms smuggling

Syrian President Bashar al-Assad has been facing the biggest challenge to his rule. Popular protests demanding greater freedoms and an end to corruption erupted on March 15 in southern Syria and had since spread to the capital Damascus and most cities in Syria.

Just like the Egyptian, Tunisian and Libyan regimes the Syrian regime has been blaming foreigners for the protests. The Syrian regime accused a Lebanese Future movement legislator of funding and arming the opposition to fuel a wave of protests in the country, a charge that was repeatedly denied by the party and MP Jamal al Jarrah.

Over 500 civilians have been killed so far in Syria by the security forces and the army .