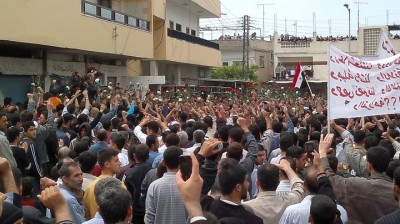 Four tanks, 20 armored personnel carriers and a military ambulance rumbled into Daraa early in the morning, a resident of the city told The Associated Press.

Daraa, which is at the heart of a six-week-old uprising against the government, has been under siege since Monday when the government first sent in tanks to crush the daily demonstrations.

The head of the Syrian Observatory for Human Rights, Rami Abdul-Rahman, said 65 people were killed Friday. with 36 deaths in the Daraa province, 27 in the central Homs region and one in Latakia and another in the Damascus countryside. Total civilian deaths since the uprising began has reached 535, he said.

The latest deaths came as the United States slapped three top officials in Assad’s regime — including his brother — with sanctions and nations agreed to launch a U.N.-led investigation of Syria’s crackdown.

An activist said authorities have asked families of some of those killed Friday to hold small funerals attended by family members only. Similar orders were given last week but most people did not abide by them, the activist added.

The move appeared to be an attempt by authorities to avoid more bloodshed, with funerals in the past weeks turned into demonstrations.

A devastating picture is emerging of Daraa — which has been without electricity, water and telephones since Monday — as residents flee across the border. The uprising began in Daraa in mid-March, sparked by the arrest of teenagers who scrawled anti-regime graffiti on a wall.

Sounds of sporadic gunfire were heard in the city Saturday, mainly from the city center area, the Daraa witness said.

“It’s getting harder and harder to know what’s happening. I can’t go outside. If I put my foot outside, they will shoot me,” the witness said. He added that snipers are shooting at people from high buildings.

He said that since Monday, troops have been allowing women to go out to buy bread, but on Saturday they prevented.

In the coastal city of Banias, a resident said army forces that set positions in the city center earlier this month withdrew late Friday, but it was unclear why they did so.

The witnesses accounts could not be independently verified. All spoke on condition of anonymity for fear of government reprisal.

Syria has banned nearly all foreign media and restricted access to trouble spots, making it almost impossible to verify the dramatic events shaking one of the most authoritarian regimes in the Arab world.

Large demonstrations were reported Friday in the capital of Damascus, the central city of Homs, the coastal cities of Banias and Latakia, the northern cities of Raqqa and Hama, and the northeastern town of Qamishli near the Turkish border.

Syrian TV said Friday that military and police forces came under attack by “armed terrorists” in Daraa and Homs, killing four soldiers and three police officers. Two soldiers were captured but later were freed by the army, state TV said. The station also said one of its cameramen was injured in Latakia by an armed gang.

The Obama administration hit three top Syrian officials as well as Syria’s intelligence agency and Iran’s Revolutionary Guard with sanctions over the crackdown.

Meanwhile, diplomats say the U.N.’s nuclear watchdog agency is setting the stage for potential U.N. Security Council action on Syria as it prepares a report assessing that a Syrian target bombed by Israeli warplanes in 2007 was likely a secretly built nuclear reactor meant to produce plutonium.

The Geneva-based Human Rights Council said it would ask the U.N. Office of the High Commissioner for Human Rights to send a mission to investigate “all alleged violations of international human rights law and to establish the facts and circumstances of such violations and of the crimes perpetrated.”

U.N. officials said the killings may include crimes against humanity. AP