Protest in Istanbul against Syrian Genocide 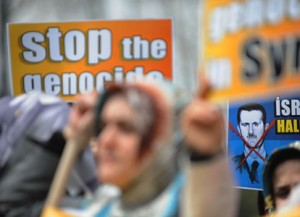 Some 1,000 people, including Syrian immigrants living in Turkey, marched Friday in Istanbul to protest the injustice done to Syria’s people by President Bashar al-Assad’s government.

The demonstrators gathered at the city’s Fatih Mosque after the Friday prayers and marched through Fevzipaşa Street to Saraçhane Park, carrying placards and chanting slogans against al-Assad. Photos of the Syrian leader were also burned by protesters at their last stop.

“The Syrian people deserve to live freely and honorably, like other people in the world,” Osman Atalay, an executive board member of the Humanitarian Relief Foundation, or İHH, said in a press statement after the march, citing requests by the Syrian opposition.

He also said the bloodshed in the country had to be stopped as soon as possible and the authorities had to immediately halt torture and arbitrary arrests. “The foreign press must also be allowed to enter the country,” Atalay said.

A massacre is happening in Syria, according to Hamid Osmanoğlu, a Syrian migrant living in Turkey. He said wounded people could not be sent to hospitals, and those who were ended up being executed.

Representatives of the Association for Free Speech and Education Rights, or Özgür-Der, and the Association for Human Rights and Solidarity for Oppressed Peoples, or Mazlum-Der, which organized the protest along with the İHH, also made speeches after Osmanoğlu, likewise damning al-Assad. Protesters burned photos of the Syrian leader following the speeches.

Some 150 people also protested the Syrian government in the Southeastern Anatolian province of Diyarbakır on Friday, according to a report by the Doğan news agency, or DHA. A representative of the Diyarbakır branch of Turkey’s Religion and Foundation Workers Union, or Diyanet-Sen, urged the Turkish government to sever its relations with the present Syrian administration.