The Fate of the Syrian Pound

The use of the Syrian pound has only started in 1948 after the secession of Bank of Syria and Lebanon, which was providing a single common currency for both countries. Although the Syrian currency has achieved great success in recent years under the reign of Bashar al-Assad, things are going for the worst. The reason is known which, of course, the protest for reforms.

The unprecedented protests on Syria showed negative effects on the local currency. Indeed, the crisis increased the demand for the dollar, weakened the local currency and pushed stock indexes into the red side.

The Syrian investors fear from embarking on investment in Syria and try to put all their investment projects on hold for the moment. Growth rates, in Syria, attained the 5% level, but these rates are on their way down because it was driven by consumption and real estate sector.

It is noted that the real estate market in Syria is suffering from depression because of the unprecedented rise in prices. Experts point out that businessmen in Syria are reluctant to expand their investments. International investors have stopped pumping their funds until the political picture becomes clearer. 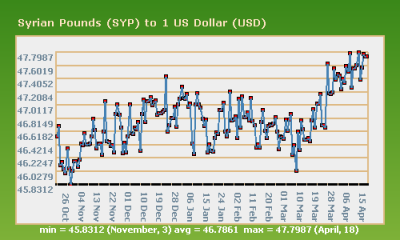 The Syrians are now buying foreign currencies in a way that threatens the Syrian economy, and the demand for the Syrian pound in other Arab countries is much less in the last period. Many Syrians and foreigners are now withdrawing their money from Syrian banks. Nevertheless, according to Dr. Dureid Dergham, General Director the largest Syrian bank network, the withdrawals from his bank since the start of the events did not exceed 2 to 3% (equivalent to 7 to 8 billion pounds) of deposits which is considered normal and that there is no reason for concern, stressing that an important part of the withdrawals were by traders to finance foreign trades, or to secure the lack of liquidity under the delay of importers in markets such as Egypt and Libya to send their payments because of the events in there.

Dergham denied the lack of liquidity, and assured that there is a good supply of cash in the markets. Indeed, he said that the banking system in Syria is able to meet all the withdrawals, and that the central bank can meet any requests, either by banks, companies, or citizens.

Dergham warned of a repeat of what happened in 2005, when everyone bought the dollar after the drop of the Syrian pound by 12%, which returned to normal later on. Therefore, Dergham called for not following the purchase of foreign currency trend and stressed that this may severely damage the economy.