Cautious calm prevailed in Tyre after the bloody clashes 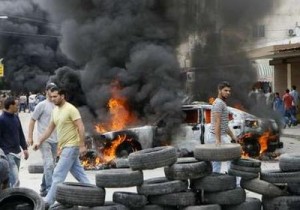 Security source told LBC that the investigation committee tasked with probing construction violations after yesterday’s clashes has started its work.

Two people were killed and two others wounded on Thursday in clashes in southern Lebanon, the Lebanese Internal Security Forces said.

The incident occurred in the southern port city of Tyre.

LBC reported that a cautious calm prevailed in Tyre and efforts are underway to restore calm in the city.

Change and Reform bloc MP Salim Salhab told Central News Agency on Friday : “The security forces in Tyre tried to handle the situation without resorting to force, but they turned to their weapons after the residents refused to comply with their orders.”

Residents threw rocks and fired shots at security forces who were trying to stop the illegal construction of homes, the ISF said.

The southern branch of the security council held an extraordinary meeting to study measures to combat construction violations following the recent clashes.

Amal Movement MP Qassem Hashem told Akhbar al-Yawm: Hezbollah and AMAL are not behind the construction violations .Hashem did not say who is behind the violations.

LBC reported that some families in Tyre have been selling their jewelry to be able to pay contractors for illegal construction on public property.

In a related development it was reported that an MTV crew came under gunfire in the Beirut southern suburb of al-Ghobeiry ( a Hezbollah stronghold ) as it was filming a report on construction violations. No one was injured in the shooting.

Photo: Residents walk past a police car set on fire and tires blocking a street in Tyre, southern Lebanon, April 21, 2011.