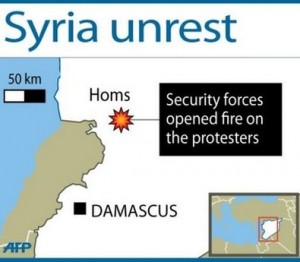 Protesters flooded into the streets after Muslim prayers in at least five major areas across the country, a sign that Assad’s attempts to quell the monthlong protests with a deadly crackdown and promises of reform have all but failed.

“Bullets started flying over our heads like heavy rain,” said one witness in Izraa, a southern village in Daraa province, the same region where the uprising kicked off in mid-March.

The protest movement has been the gravest challenge against the autocratic regime led by Assad, who inherited power from his father 11 years ago in one of the most rigidly controlled countries in the Middle East.

Tens of thousands of people were protesting in the Damascus suburb of Douma, the central city of Homs, Banias on the coast, the northeastern Kurdish region and the southern province of Daraa, where the uprising kicked off in mid-March.

Witnesses said they saw at least five corpses at the Hamdan hospital outside the capital. All suffered gunshot wounds.

In the southern province of Daraa, other witnesses said at least 10 people were killed when protesters marched in front of the mayor’s office in Izraa. They said an 11-year-old boy was among the dead.

“Among the dead was Anwar Moussa, who was shot in the head. He was 11,” said the witness.

The witnesses spoke on condition of anonymity for fear of reprisals.

The protest movement has crossed a significant threshold in recent days, with increasing numbers now seeking the downfall of the regime, not just reforms. The security crackdown has only emboldened protesters, who are enraged over the deaths of more than 200 people over five weeks.

Friday’s witness accounts could not be independently confirmed because Syria has expelled journalists and restricted access to trouble spots. Witnesses spoke on condition of anonymity for fear of reprisals.

Activists promised that Friday’s protests will be the biggest rallies yet against the regime led by Assad, who inherited power from his father 11 years ago in one of the most authoritarian countries in the Middle East.

The president has been trying to defuse the protests by launching a bloody crackdown along with a series of concessions, most recently lifting emergency laws that gave authorities almost boundless powers of surveillance and arrest.

But many protesters said the concessions have come too late — and that Assad does not deserve the credit.

“The state of emergency was brought down, not lifted,” prominent Syrian activist Suhair Atassi, who was arrested several times in the past, wrote on her Twitter page. “It is a victory as a result of demonstrations, protests and the blood of martyrs who called for Syria’s freedom.”

Earlier Friday, witnesses said security forces in uniform and plainclothes set up checkpoints around the Damascus suburb of Douma, checking peoples identity cards and preventing nonresidents from going in.

Syria stands in the middle of the most volatile conflicts in region because of its alliances with militant groups like Lebanon’s Hezbollah and with Shiite powerhouse Iran. That has given Damascus a pivotal role in most of the flashpoint issues of the region, from the Arab-Israeli peace process to Iran’s widening influence.

If the regime in Syria wobbles, it also throws into disarray the U.S. push for engagement with Damascus, part of Washington’s plan to peel the country away from its allegiance to Hamas, Hezbollah and Tehran. AP