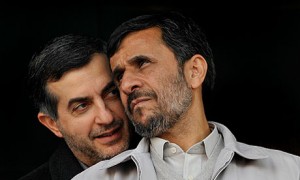 A close ally of Mahmoud Ahmadinejad, who favours cultural openness and opposes greater clerical involvement in politics, is being groomed as a possible successor to the Iranian president when he steps down in two years time.

Esfandiar Rahim Mashaei, Ahmadinejad’s chief-of-staff, is positioning himself as a candidate who will champion a nationalist rather than a theological narrative of Iran. Mashaei, whose daughter married Ahmadinejad’s son, has become the most controversial political figure in Iran, provoking harsh criticism from the conservative establishment, including the supreme leader, Ayatollah Ali Khamenei.

Hardliners close to Khamenei have accused Mashaei of compromising the Islamic Revolution and the principles of Islam by focusing on Persian history.

Mashaei infuriated conservatives in 2008 when he said that Iranians are “friends of all people in the world – even Israelis”. He was also criticised for applauding at a ceremony in Turkey in which women performed a traditional dance. Women are not allowed to dance in Iran.

Mashaei used to head Iran’s cultural heritage organisation. He was appointed first vice-president in 2009 when Ahmadinejad resumed office following disputed elections that generated mass protests. But he was forced to step down when Khamenei intervened and said in a letter to the president that “the regime’s expediency” required Mashaei to leave his post.

Ahmadinejad appointed Mashaei as chief-of-staff instead, a move seen by many as a blow to Khamenei and the first sign of split emerging between the president and the supreme leader.

A confidential US diplomatic cable revealed by WikiLeaks said the incident underlined Mashaei’s significance in Ahmadinejad’s team. “Ahmadinejad’s stubborn defence of Mashaei bespeaks his importance as a key adviser for the increasingly isolated president; he also has emerged as a spokesman for the Ahmadinejad administration. Ahmadinejad has even told press that he would gladly serve as vice-president in a Mashaei administration, prompting many to speculate that Ahmadinejad seeks to have Mashaei replace him in 2013,” the cable reads.

Some analysts believe that a regime which has crushed the green opposition movement and is short of internal opposition, is merely creating one in order to create a show of legitimacy come the next election.

Hooshang Amirahmadi, the president of the American Iranian Council who knows Mashaei, told the Guardian: “The reformist movement in Iran did not succeed for various reasons. I think Mashaei has become another alternative and the regime is using this opportunity to heat up the next election in Iran. Mashaei is saying that Iranians are at first Iranians and Islam comes afterward.

“He is reviving a source of national pride of Iranians, something that has been neglected not only since the Islamic Revolution in 1979 but in the past two centuries.”

Amirahmadi said: “After the revolution, an extensive obsession with Islam made the authorities neglect Iran’s history and Mashaei is now seeking to promote this sort of nationalistic narrative. I think Ahmadinejad himself is also in favour of Iran’s history and has sought to revive Iran’s ancient glory and power.”

Iranians are proud of their history and still largely celebrate many ancient traditions that goes back as far as the country’s Zoroastrian era, such as the Persian new year, Nowruz.

Mashaei is also believed to have played a crucial role in securing the loan from the British Museum of the Cyrus Cylinder. The artefact, considered the first human rights charter, was seen by a million visitors in Tehran during its six-month exhibition, although hardliners and clerics largely boycotted the event. The relic was returned to the UK last week.

“Obviously Mashaei’s nationalistic views are a threat to clerics. They are afraid that their power might wane if people begin to respect their pre-Islamic history,” Amirahmadi said.

Mashaei, whose name has been touted among political activists as a possible 2013 candidate, has not ruled out the possibility of running for president, recently telling reporters he would make a definitive decision six months from the election.

Kayhan, a newspaper aligned with Khamenei, predicted that Iran’s powerful Guardian Council would block Mashaei’s candidacy if he decides to run. The Guardian Council vets all candidates before any elections in Iran.

Mashaei, who is launching a newspaper next month, is also believed to have tried to secure the release of three Americans detained in Iran, a move that resulted in the release of one of the prisoners, Sarah Shourd. Her friends, Shane Bauer and Josh Fattal, remain in Tehran after their release was believed to have been blocked by hardliners.