A Tahrir square (Liberation square) in Syria too

The Facebook group, The Syrian Revolution 2011, which boasts more than 120,000 followers and which has emerged as the organizing force behind the demonstrations that have been demanding “freedom” in Syria has reported that the protesters in the city Homs have renamed the downtown New Clock Square as the Tahrir square of Liberation square, after the one in Cairo .

The Cairo Tahrir square witnessed the largest ever protests in Egypt which ended the ruke of former president Hosni Mubarak. 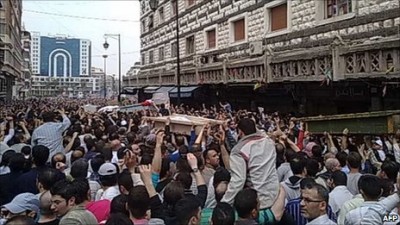 Syrian Revolution 2011 called today for a minimum of 3 day sit-ins across the country until their demands are me.

In The Syrian city of Banias the Syrian security forces demonstrated in support of the Syrian president Bashar al Assad . They were chanting “Bashar don’t worry we are your men and we drink blood” . Watch the You Tube