What Happened to the Arab Spring? Ask Saudi Arabia.

by Ghassan Karam
1053
The Arab countries, each and every one, have the distinction of being ruled by undemocratic and illiberal regimes. This has been the case at least since the era of independence that started almost a century ago.
Share: 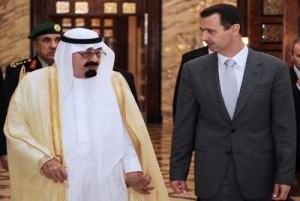 The Arab countries, each and every one, have the distinction of being ruled by undemocratic and illiberal regimes. This has been the case at least since the era of independence that started almost a century ago.  Even prior to WWI the Arab Middle East, under the Ottoman rule, did not experience a major revolutionary movement demanding sovereignty, and personal liberty despite the fact the Turkish rule was ruthless and exploitative.

Many a study has concluded that the Arab countries  have failed to actualize their potential and that the region as a whole has trailed practically all parts of the world in economic, political and social development save for sub Saharan  Africa.  This is why so many in the region as a whole and in the rest of the world were elated when the Tunisian popular uprising was followed by the one in Egypt. These promising and exciting developments led so many to talk about an Arab Spring that has finally arrived to transform the region and deliver on the promise of economic, social and possibly environmental development.

The euphoria was contagious. Demonstrators went to the streets of Yemen, Bahrain and Libya. The last four weeks have even witnessed popular movements all across Syria. Is the Arab Spring here to stay? Is it a historical moment similar to the annus mirabilis of 1848 in Europe?

The Arab Spring appears to have been overwhelmed by a deep frost that might just kill all of the revolutionary buds. With the exception of Tunisia the revolutionary zeal has been either co-opted by the old established ruling class, Egypt is currently ruled by a 75 year old general who has never shown any predilection for democracy and individual freedom. The army has actually imprisoned a blogger for having assumed that it was his natural right to express his point of view.

In Libya it is even worse, much worse. The Libyan dictator or mad man Qaddafi would rather carry a civil war, orders the army to strafe civilian protestors and unleash savage artillery bombardments of those that dare ask for an end to the cult of personality rule. Colonel Qaddafi’s efforts to subdue brutally civilian demonstrators were halted, at least temporarily, by the United Nations Security Council who came to the rescue of the besieged civilians. The French, British and US aerial support has given way two weeks ago to NATO who has not been able to keep up the pressure on the Qaddafi loyalists. It appears currently that what looked to be another victory for the popular masses has been brought to a standstill. Qaddafi might still be defeated but this does not mean that democracy and freedom are about to follow.

Then there is Syria and Bahrain. Two nascent revolutionary movements struggling with established dictatorships. In Syria the Assad regime of the Baath party has promised a modicum of reforms, not the least of which is the lifting of the emergency rules that have been established almost half a century ago. The demonstrators in Syria were initially encouraged by the UNSC resolution on Libya calling for the protection of the peaceful demonstrators. These hopes were squashed when Saudi Arabia in conjunction with Hillary Clinton gave the present regime in Syria the moral support that it needed to deal brutally with the demonstrators. Thanks to the efforts of the Saudi King, the world s’ sole absolute monarchy, the aspirations of the people of Bahrain and Syria have been dealt a serious setback. The legitimate demands for reforms in Bahrain have been silenced by sending into the island Kingdom Saudi Arabian troops under the guise of the GCC, when you have such friends who needs any enemies.

Under the best of circumstances, the chances for an Arab Spring were never overwhelming. But the possibility of success has been dealt a major blow by the unholy union of reactionary forces led by Saudi Arabia whose king was not in favour of even allowing the Egyptian masses to remove the corrupt Mubarak regime in Egypt.  Unfortunately these reactionary forces cannot be dismissed since Saudi Arabia controls the daily production of 10 million barrels of oil in a world described best by Peak Oil scarcities.

Yet, despite all of this, the blame for the failure of the Arab Spring does not lie totally on the shoulders of the reactionary Saudi regime and the dictatorships that it supports. How can the Saudis support democratic representation when they are the antithesis of such societal make ups? The real ultimate reason for an Arab Spring is the same one that has haunted the Arab world for centuries.  It is the lack of a strong personal commitment to the ideas of personal liberty, freedom, equality and secularism. It seems that we are destined to continue offering our allegiances to local tribes instead of cultivating the notion of citizenship and equality.