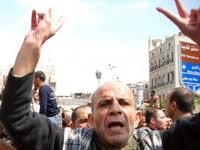 The Syrian parliament is preparing to adopt major reforms in May, including an end to emergency rule, a politician close to the regime said on Wednesday.

“There will be an extraordinary session from May 2 to 6 in which social and political laws will be adopted in line with the reforms desired by the head of state,” the politician said.

“Among them is new legislation that will replace the current emergency law,” he said, adding that the proposed bill will be presented to the head of state before the end of the week, well ahead of an April 25 deadline.

According to the same source, Syrian President Bashar al-Assad “intends to ask members of civil society for their input and then the government will adopt the draft law to present it to parliament early May.”

The lifting of emergency rule, in place since 1962, has been a central demand of anti-government protestors who have been calling for political reform and more freedoms since mid-March. A lawmaker confirmed that laws governing the formation of political parties and media would be reviewed in this extraordinary session.   Jakarta globe