Ivory coast crisis may be soon over as Gbagbo surrenders 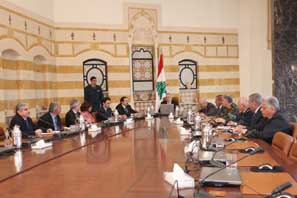 Lebanon’s Higher Defense Council held an emergency meeting Tuesday at the Baabda presidential Palace to address the fate of the Lebanese expatriates in the Ivory Coast.

The meeting which was headed by President Michel Suleiman, stressed the need to develop a plan to help the expatriates in the embattled African country , according to a statement issued by the council at the end of the meeting .

“The plan also provides the best deals with the best means to evacuate those seeking to leave in coordination with the Lebanese Embassy, United Nations, and Ivory Coast authorities,” the statement added.

The Lebanese expatriate in Côte d’Ivoire reportedly came under threat after Lebanon’s ambassador meddled in the internal affairs of the country by attending the swearing-in ceremony of Laurent Gbagbo, the controversial strongman who has refused to step down despite rival Alassane Ouattara being internationally recognized as having won the country’s elections.

MSNBC reported that Gbagbo said he was willing to surrender and has asked for United Nations protection, according to a U.N. official.

“…President Gbagbo has also surrendered and has asked UNOCI’s protection,” according to a document to U.N staff, Reuters reported.