The Ecological Footprint of the Arab World: disastrous

by Ghassan Karam
896
It is so common to speak about environmental degradation but unfortunately no country or group of people seem to be willing to do anything meaningful about the single most important challenge that humanity has ever faced.
Share:

It is so common to speak about environmental degradation but unfortunately no country or group of people seem to be willing to do anything meaningful about the single most important challenge that humanity has ever faced. The problem does not manifest itself in the area of prognosis. A large number of studies by individuals, universities, governments and the UN have concluded as a result of numerous detailed studies that the world is full and that business as usual will only lead to disastrous outcomes, possibly collapse, and total collapse of civilization. Furthermore if collapse is to be the outcome then it would not be the first time that the human inability to take decisive corrective action has resulted in ruin. Just ask the Incas , the Mayans and the inhabitants of Easter Island..

Obviously the adoption of  meaningful sustainable measures is in everyone’s interest. But yet we have failed to undertake a single measure anywhere in the world that would move us in the right direction. Why? The answer is very simple.  Capitalism cannot accept a no growth economy irrespective of the fact that all our studies tell us that the world is full and cannot accommodate any more growth. Actually we know that the present level of economic activity is beyond the carrying capacity of the globe and so sustainability demands major significant cuts in the level of economic activity if we are to have a shot at preventing a climate change of over 2 degrees Celsius.

One of the most common measures of sustainability is that of the ecological footprint. That is simply an estimate of the resources consumed by each person in order to lead the average life style in each country. Studies have shown that at the present the global resources available per person are less than 2 hectares. It follows therefore, that whenever the average footprint per capita of the citizens of a nation is above 2 hectares then that country is operating at a global deficit. This simply means that these citizens are maintaining a life style that we cannot afford, as a planet and that this state of affairs can only result in disastrous outcomes for everyone. That is the message of the Tragedy of the Commons that Hardin has popularized almost fifty years ago . 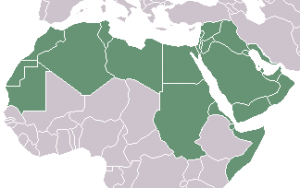 Not all of the Arab countries belong to the group of overconsumption. Algeria, Iraq, Jordan, Egypt and Morocco have a per capita ecological footprint that ranges between 1.79 and 1.56 hectares. This implies that each of these countries could increase slightly its level of consumption and yet stay within the global carrying capacity. Sudan on the other hand has an ecological footprint of only 1.14 hectares per capita.

A simple calculation of the total deficit created by the Arab world as a whole reveals the uncomfortable fact that we are in a deficit of about 200 million hectares annually.  If we , as a region, are to take our responsibilities towards a sustainable world seriously then we have no choice but to : (1) adopt strict population policies that would result in decreasing the size of the human population of the region. Stabilizing the population is not acceptable and to continue , unchecked, the current rates of growth in population are immoral and irresponsible. (2) The level of consumption in the region as a whole is excessive and steps must be taken to limit it to levels that would correspond to a sustainable level. (3) No doubt that a few are consuming too much and many do not have enough and this calls for strong redistribution efforts. (4) And lastly we have to confront head on the question of whether any of the above can be realistically achieved under capitalism?

Since it should be clear that the answer to #4  is clearly a resounding no and since we will not change the current societal structure then we should not be surprised when the inevitable collapse takes place. We have no one to blame but ourselves.