by yalibnan
362
The assumption that being educated and having been exposed to Western ways, he’d been Westernized. Wrong. Assad has run the same iron-fisted police state as did his father.
Share: 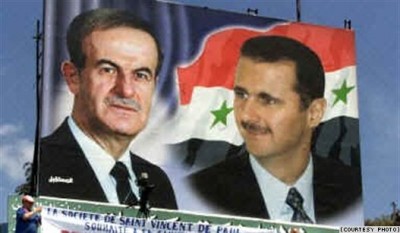 Many of the members of Congress of both parties who have gone to Syria in recent months have said they believe he’s a reformer.

Few things said by this administration in its two years can match this one for moral bankruptcy and strategic incomprehensibility.

First, it’s demonstrably false. It was hoped that President Assad would be a reformer when he inherited his father’s dictatorship a decade ago. Being a London-educated eye doctor, he received the full Yuri Andropov treatment — the assumption that having been exposed to Western ways, he’d been Westernized. Wrong. Assad has run the same iron-fisted Alawite police state as did his father.

Bashar made promises of reform during the short-lived Arab Spring of 2005. The promises were broken. During the current brutally suppressed protests, his spokeswoman made renewed promises of reform. Then Wednesday, appearing before parliament, Assad was shockingly defiant. He offered no concessions. None.

Second, Clinton’s statement is morally obtuse. Here are people demonstrating against a dictatorship that repeatedly uses live fire on its own people, a regime that in 1982 killed 20,000 in Hama and then paved the dead over. Here are insanely courageous people demanding reform — and the U.S. secretary of state tells the world that the thug ordering the shooting of innocents already is a reformer, thus effectively endorsing the Baath party line — “We are all reformers,” Assad told parliament — and undermining the demonstrators’ cause.

Third, it’s strategically incomprehensible. Sometimes you cover for a repressive ally because you need it for U.S. national security. Hence our muted words about Bahrain. Hence our slow response on Egypt. But there are rare times when strategic interest and moral imperative coincide completely. Syria is one such — a monstrous police state whose regime consistently works to thwart U.S. interests in the region.

During the worst days of the Iraq war, this regime funneled terrorists into Iraq to fight U.S. troops and Iraqi allies. It is dripping with Lebanese blood as well, being behind the murder of independent journalists and democrats, including former prime minister Rafiq al-Hariri. This year, it helped topple the pro-Western government of Hariri’s son, Saad, and put Lebanon under the thumb of the virulently anti-Western Hezbollah. Syria is a partner in nuclear proliferation with North Korea. It is Iran’s agent and closest Arab ally, granting it an outlet on the Mediterranean. Those two Iranian warships that went through the Suez Canal in February docked at the Syrian port of Latakia, a long-sought Iranian penetration of the Mediterranean.

Yet here was the secretary of state covering for the Syrian dictator against his own opposition. And it doesn’t help that Clinton tried to walk it back two days later by saying she was simply quoting others. Rubbish. Of the myriad opinions of Assad, she chose to cite precisely one: reformer. That’s an endorsement, no matter how much she later pretends otherwise.

And it’s not just the words; it’s the policy behind it. This delicacy toward Assad is dismayingly reminiscent of President Obama’s response to the 2009 Iranian uprising during which he was scandalously reluctant to support the demonstrators, while repeatedly reaffirming the legitimacy of the brutal theocracy suppressing them.

Why? Because Obama wanted to remain “engaged” with the mullahs — so that he could talk them out of their nuclear weapons. We know how that went.

The same conceit animates his Syria policy — keep good relations with the regime so that Obama can sweet-talk it out of its alliance with Iran and sponsorship of Hezbollah.

Another abject failure. Syria has contemptuously rejected Obama’s blandishments — obsequious visits from Senate Foreign Relations Committee Chairman John Kerry and the return of the first U.S. ambassador to Damascus since the killing of Hariri. Assad’s response? An even tighter and more ostentatious alliance with Hezbollah and Iran.

Our ambassador in Damascus should demand to meet the demonstrators and visit the wounded. If refused, he should be recalled to Washington. And rather than “deplore the crackdown,” as did Clinton in her walk-back, we should be denouncing it in forceful language and every available forum, including the U.N. Security Council.

No one is asking for a Libya-style rescue. Just simple truth-telling. If Kerry wants to make a fool of himself by continuing to insist that Assad is an agent of change, well, it’s a free country. But Clinton speaks for the nation. WP