6 killed in police attack on mosque in southern Syria 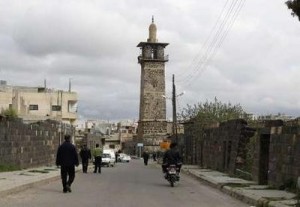 Six people died Wednesday when Syrian security forces attempted to storm a mosque in the southern town of Daraa, where unrest has flared for days.

Residents reported hearing the sound of gunfire in the early hours of the morning near the Omari mosque, the center of protests that started Friday, Al Jazeera reported.

“An armed gang after midnight attacked a medical team in an ambulance at the Omari mosque, killing a doctor, a paramedic and the driver. The security forces who were near the area intervened, hitting some and arresting others,” the official news agency said, adding that a security force member was killed in the operation.

Mohammed al Abdallah, an exiled Syrian rights activist living in the US, told Al Jazeera that a doctor was among those killed.

“Security forces opened fire. They used bombs and live ammunition,” he said. “There are many injuries, including women and children.”

Abdallah said electricity was cut off before the attack and that security forces were preventing ambulances from entering the center of Daraa.

The incident came hours after police fired tear gas on protesters in a bid to break up anti-regime demonstrations, AFP reported.

On Tuesday, some 1,000 protesters gathered around the mosque, and many formed a human shield around it to prevent security forces from approaching the shrine.

Syria, which is still under a 1963 emergency law banning demonstrations, has witnessed a string of small but unprecedented protests demanding the end of the ruling Assad regime.

Daraa, a town about 60 miles south of capital Damascus and home to large tribal families, has been the focal point of the rallies, the latest in a string of uprisings against long-running autocratic regimes in the Arab world. Fox