Hariri: Any sect that tried to control Lebanon has failed

Addressing a popular rally of tens of thousands of supporters at the end of his three-day visit to Tripoli, Caretaker Prime Minister Saad Hariri stressed on Friday that any sect that tried to control Lebanon has failed .

Hariri called on the country’s Shiites on Friday to work together along with his party in order to strengthen the Lebanese state.

“When we address our Shiite brothers in Lebanon, we call on them to stand with us, next to the Lebanese state,” Hariri said

“Nothing can protect us and Lebanon except the state. The hegemony of the arms is aimed at obstructing the state, eliminating justice, and enforcing crime as a means for pursuing political life,” the caretaker premier added.

In reference to the rally that marked the 6th anniversary of the Cedar revolution Hariri said:

“I came to the North to thank all the Lebanese who participated in the March 13 rally last Sunday and to tell the world that we oppose the hegemony of the weapons over Lebanon.”

“This time and like 2005, you rallied demanding nothing but freedom and justice,” he added.

“I am confident that you won’t allow those carrying weapons to try to eliminate justice,” he declared, in reference to Hezbollah’s undermining of the Special Tribunal for Lebanon ( STL)

“We are standing before two choices. We either choose the state or the hegemony of the arms … and after Sunday’s rally, you have clearly chosen the state to achieve justice and uncover the truth in the assassination of former Premier Rafik Hariri,” he said. 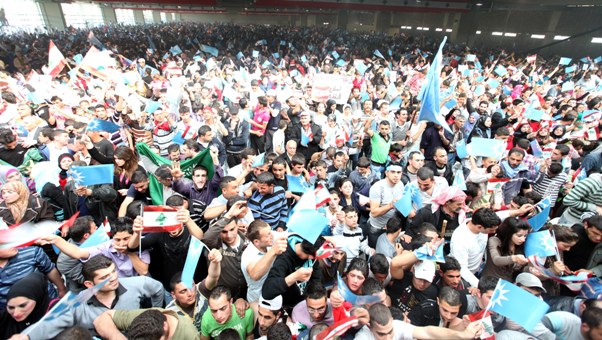 “We are here in Tripoli to tell you that we do not want any state in Lebanon but the Lebanese state.” He stressed

He reminded the Shiites in Lebanon, that “Prominent Shiite Imams have stated that any project outside the state’s authority is doomed to fail.”

He stressed that the use of non-state weapons in the country is “what leads to strife.”

“The Shiites know that anyone calling for the rise of the state and placing the arms under state control cannot be a traitor,” he noted.

“Is it possible that this city ( Tripoli) be accused of treason after it presented martyrs from the Lebanese army when red lines did not stop it from combating terrorism that struck in the heart of the North?” he asked, in reference to the Lebanese army battle with Fatah al Islam in the Nahr el Bared Refugee camp

Hariri added: “We will no longer tolerate accusations of treason against whoever wants the rise of a strong state.”

He also vowed that bullying through the use of non-state arms will not be allowed in the country.