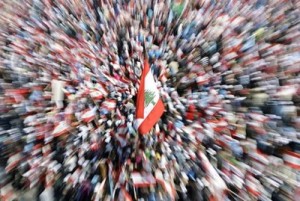 “On Sunday, you were victorious against the weapons’ oppression and the policy of intimidation and terrorization,” March 14 General Secretariat said in a statement on Monday in which it thanked “every free citizen who left his house despite all the sectarian or partisan obstacles” to take part in March 14’s Sunday rally

“On Sunday, you won over arms and fear,” the statement added.

“With the renewal of the Lebanese revolution, we vow to remain up to you expectations without making any concessions over them,” the statement continued.

In a country of 4 million people, more than one million Lebanese of all faiths… Christians. Druze , Muslim Shiites and Sunnis demanded that Hezbollah be disarmed as they rallied to mark the sixth anniversary of the Cedar Revolution, the uprising which inspired the recent revolts in the Middle East, International news agencies reported

The theme at Sunday’s rally was simple:” We want one state …one army to defend the country …lets unite the country and get rid of all the other states and armies .” the organizers said in reference to Hezbollah’s state within the state of Lebanon and the non-state ( illegal) arms.