Hariri in Riyadh for talks with Saudi officials 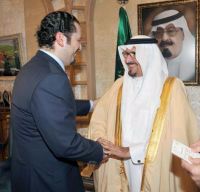 Outgoing Prime Minister Saad Hariri met Sunday with Saudi Crown Prince Sultan Bin Abdel Aziz at his office in Riyadh, according to a statement issued by Hariri’s office on Sunday.

“Hariri and Prince Sultan discussed bilateral relations and latest developments in the Arab world and the region,” the statement added.

Hariri arrived on Friday to Saudi Arabia to meet with Saudi King Abdullah bin Abdel Aziz after his three months trip for back surgery.

Mikati, Jumblatt, Safadi and their blocs were all elected on March 14 electoral lists during the 2009 parliamentary elections

1- The number one obstacle is reportedly Free Patriotic Movement’s leader MP Michel Aoun due to his continued insistence of acquiring the interior ministry portfolio from President Michel Suleiman.

2- the issue of a blocking minority and who should get it . Some support granting it to Mikati and Suleiman, while others are demanding that it should be granted to Mikati, Suleiman, and Progressive Socialist Party leader MP Walid Jumblat.