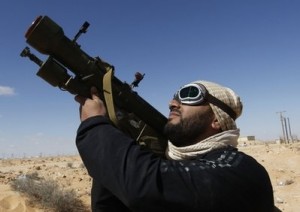 Libyan helicopter gunships strafed opposition fighters as forces loyal to Moammar Gadhafi pounded them with artillery and rockets Sunday, dramatically escalating a counteroffensive to halt the rapid advance of rebels toward the capital, Tripoli.

Another scene of heavy fighting was the city of Misrata, 120 miles (200 kilometers) east of Tripoli, where a doctor told The Associated Press 20 people were killed and 100 wounded. Residents said pro-Gadhafi troops punched into the city with mortars and tanks but were pushed out five hours later by rebel forces. The rebel commanders intentionally opened the way for government tanks to enter the city, then surrounded them and attacked with anti-aircraft guns and mortars, said Abdel Fatah al-Misrati, one of the rebels.

“Our spirits are high,” he said. “The regime is struggling and what is happening is a desperate attempt to survive and crush the opposition. But the rebels are in control of the city,” al-Misrati added.

With the counteroffensive intensifying, Libya sank deeper into chaos and heavy bloodshed while the international community appeared to be struggling to put military muscle behind its demands for Gadhafi to give up power. Britain said one of the most talked about ideas for intervention — the idea of a no-fly zone over Libya — is still in an early stage of planning and ruled out the use of ground forces.

“We call on the world to take action, to strike (Gadhafi’s) powerful bases to rescue the civilians,” one Misrata resident said. “He has all the power to smash the people.”

Hundreds, perhaps thousands, have died since Libya’s uprising began on Feb. 15, but tight restrictions on media make it near impossible to get an accurate tally. More than 200,000 people have fled the country, most of them foreign workers. The exodus is creating a humanitarian crisis across the border with Tunisia — another North African country in turmoil after an uprising in January that ousted its longtime leader.

Sunday’s fighting appeared to signal the start of a new phase in the conflict, with Gadhafi’s regime unleashing its air power on the poorly equipped and poorly organized rebel force trying to oust their ruler of 41 years. Resorting to heavy use of air power signaled the regime’s concern that it needed to check the advance of the rebel force toward the city of Sirte — Gadhafi’s hometown and stronghold.

If Sirte were to fall in rebel hands, it would give the anti-Gadhafi forces a massive morale boost and momentum that could carry them all the way to the gates of Tripoli.

The opposition force — estimated between 500 and 1,000 fighters — pushed out of the rebel-held eastern half of Libya late last week for the first time and has been cutting a path west toward Tripoli. On the way, they secured control of two important oil ports at Brega and Ras Lanouf.

On Saturday night, the rebels pushed as far west as the town of Bin Jawwad, about 110 miles (160 kilometers) east of Sirte. But after they reached it, they pulled back east about 30 miles to the town of Ras Lanouf for the night.

Unbeknownst to the opposition, pro-Gadhafi forces moved into Bin Jawwad overnight and when they rebels returned at daylight, they came under a barrage of fire from helicopter gunships and artillery and rockets from the ground. Associated Press reporters at the scene saw fierce battles raging throughout the day.

“We got thrown by bombs and snipers from the side roads that we can’t see,” recalled Jamal al-Karrari, a Libyan who abandoned his studies in the U.S. to join the uprising. “I didn’t even use my Kalashnikov; I didn’t find a target. All we were trying to do was escape and come back.”

The rebels staged several offenses throughout the day, while unarmed spectators, many decorated with the rebel flag, cheered them on from the road. Each advance, however, was met with a withering barrage of cannon fire that threw the rebels back.

From the edge of Bin Jawwad where the rebels massed, a steady barrage of rockets and artillery fired by pro-Gadhafi forces thumped to the ground throughout the day to keep them from advancing. But the mood was still upbeat, with some of the opposition supporters draping themselves in the rebel flag.

At one point, about 50 rebel fighters were trapped inside a mosque, and their comrades who had retreated to the edge of the city suddenly surged forward in 20 pickup trucks to try to rescue them. They drove into the bombardment and one of the trucks was hit, sending a huge plume of black smoke into the air.

“They took one of every family hostage to keep them from fighting,” he said.

During the fighting, ambulances sped back east toward a hospital in nearby Ras Lanouf while rebel trucks, at least four of them mounted with multiple-rocket launchers, raced west to reinforce the front lines.

Six people were killed in the fighting for Bin Jawwad and a French journalist for France 24 TV was among 60 people wounded, hospital officials said.

In Misrata, a city east of the capital about halfway down the road to Sirte, residents said the rebels repelled a government counteroffensive to seize back control.

The regime forces attacked just before noon with tanks, mortars, artillery and anti-aircraft guns. A heavy gunbattle raged for about five hours and residents said they were choking on the smoke that clogged the air.

Abubakr al-Misrati, a doctor at Misrata hospital said 20 people were killed, 14 of them from Gadhafi’s forces, and 100 injured.

In Tripoli, the capital of 2 million that is most firmly in Gadhafi’s grip, residents awoke before dawn to the crackle of unusually heavy and sustained gunfire that lasted for at least two hours. Some of the gunfire was heard around the sprawling Bab al-Aziziya military camp where Gadhafi lives, giving rise to speculation that there may have been some sort of internal fighting within the forces defending the Libyan leader inside his fortress-like barracks. Gadhafi’s whereabouts were unknown.

Libyan authorities tried to explain the unusually heavy gunfire by saying it was a celebration of the regime taking back Ras Lanouf and Misrata, though both places appeared to still be in rebel hands.

After the gunfire eased in the early morning, thousands of Gadhafi’s supporters poured into Tripoli’s central square for a rally that lasted all day, waving green flags, firing guns in the air and holding up banners in support of the regime. Hundreds drove past Gadhafi’s residence, waving flags and cheering. Armed men in plainclothes were standing at the gates, also shooting in the air.

The uprising against Gadhafi, which began just days after President Hosni Mubarak was ousted by protesters in neighboring Egypt, is already longer and much bloodier than the relatively quick revolts that overthrew the longtime authoritarian leaders of neighboring Egypt and Tunisia.

In contrast, Libya appears to be sliding toward a civil war that could drag out for weeks, or even months. Both sides appear relatively weak and poorly trained, though Gadhafi’s forces clearly have the advantage in terms of number and equipment.

The conflict took a turn late last week when the government opponents, backed by mutinous army units and armed with weaponry seized from storehouses — went on the offensive. At the same time, pro-Gadhafi forces have conducted counteroffensives to try to retake the towns and oil ports the rebels have captured since they moved out of the rebel-held east.

The regime has also fought throughout the weekend to retake control of Zawiya west of Tripoli — where bloody street battles were reported. Zawiya, just 30 miles from Tripoli, is the closest rebel-held city to the capital.

On Sunday, Zawiya residents said rebels were back in control of the city after a three-hour battle. Pro-Gadhafi forces entered in full force with tanks, anti-aircraft guns and mortars, firing them at people and buildings. Residents said the fighters seized weapons, ammunition, tanks and pickup trucks from the retreating forces.

They said the pro-Gadhafi forces had withdrawn to the outskirts of the city and they were bracing for a new offensive.

On Saturday, residents said the city was attacked by 26 tanks. But thousands went out to fight the attacking force at the square. One rebel said opposition fighters also took hostages on Saturday and shot and killed at least 10 of them in a hotel near the square.

“The determining factor in these battles is the mercenaries and regime fighters,” said the rebel fighter. “Their motive is financial, no more and no less. This is the difference between them and someone like us who is defending his land and country.”

“At the beginning (of fighting), our weapons were rudimentary. But every time they attack us, we seize their weapons,” he said.

Most of the residents interviewed spoke on condition of anonymity for fear of reprisals.

The uprising has put Gadhafi back in a position he has known before — international isolation. The U.N. has imposed sanctions, and Libya’s oil production has been seriously crippled by the unrest. The turmoil has caused oil prices to spike on international markets.

The U.S. is demanding Gadhafi give up power and has moved military forces closer to Libya’s shores to back up its demand.

If the rebels continue to advance, even slowly, Gadhafi’s heavy dependence on air power could prompt the West to try hurriedly enforce a no-fly zone over the country to prevent the regime from defeating the rebels.

However, enforcing a no-fly zone could take weeks to organize and, as U.S. Defense Secretary Robert Gates has said, it must be preceded by a military operation to take out Libya’s air defenses.

British Foreign Minister William Hague urged Gadhafi to hand over power and put an “immediate stop” to the use of armed force against Libyans and give up power. He said a no-fly zone over Libya is still in an early stage of planning and ruled out the use of ground forces.

The rebels headquartered in the main eastern city of Benghazi have already set up an interim governing council that is urging international airstrikes on Gadhafi’s strongholds and forces.

Hague said Sunday that a small British diplomatic team has left Libya after running into a problem while on a mission to try to talk to rebels in the eastern part of the country. The Foreign Office declined to comment on reports earlier in the day the team included special forces soldiers who had been detained in Benghazi by Gadhafi opponents.

Earlier, Hague echoed Defense Minister Liam Fox in telling the BBC it would be inappropriate to comment on an article in Britain’s Sunday Times newspaper that soldiers were captured by rebel forces when a secret mission to put British diplomats in touch with leading opponents of Libya’s embattled leader went awry.

Photo: An Libyan rebel fighter , holds his anti-aircraft missile as he looks to the sky, in the oil town of Ras Lanouf, eastern Libya, Sunday, March 6, 2011.