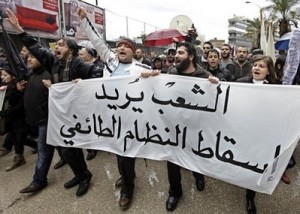 Several people gathered in front of the Interior Ministry building in Beirut on Friday to call for ending Lebanon’s confessional system.

The protesters carried banners that demanded the end of the country’s sectarian system, the National News Agency (NNA) reported.

The protesters also set up two tents facing the ministry’s building, signaling the beginning of an open protest, the NNA added.

Lebanon’s government system is rooted in a 1943 power-sharing agreement along sectarian lines adopted after the country acquired its independence from France.

In order to maintain a balance between the 18 religious sects in the country, the agreement calls for the president to be a Maronite Christian, the prime minister to be a Sunni Muslim and the speaker of parliament a Shia Muslim.

Other government jobs are also allocated according to religious affiliation. Now Lebanon