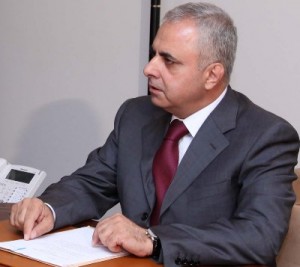 He died at a hospital in Germany where he was receiving treatment for the past two months after being diagnosed with the illness and will be buried in his hometown of Kfarhatta a suburb of the city of Sidon in south Lebanon.

Jezzini, who was close to Hezbollah and Syria, headed the General Security department, the agency responsible among other duties for issuing passports, surveying the borders, and keeping an eye on foreign visitors and residents in Lebanon. (His predecessor, Jamil Al Sayed, was one of Syria’s top operatives in Lebanon from 1998-2005, when he was imprisoned in connection to the assassination of former Lebanese premier Rafik Hariri).

Jezzini made the news in 2010 following the assassination of a Hamas operative in Dubai.

During an interview with Al Manar TV on March , 17 2010 he described his new plan to keep Israeli infiltrators out of Lebanon. According to Jezzini, lists of Jewish family names have been distributed at the borders. “When someone arrives in Lebanon with a foreign passport and his family name suggests that he is of Jewish origin, the border center sends his information to the central information office at the General Security Directorate, which specifically takes responsibility for following this individual,” Jezzini said.

Jezzini who was born in 1951 enlisted in the military academy in 1973, rising through the ranks until he reached the rank of general in 2003 and receiving several accolades from the army commander.

He assumed his position as General Security chief in 2005.

Jezzini is survived by his wife and four children.