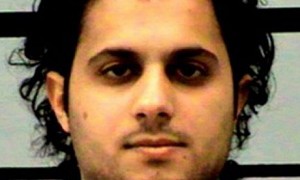 The homes of former US president George W Bush and American military personnel stationed at Iraq’s Abu Ghraib prison were among potential targets scouted by a Saudi student arrested in Texas on charges of attempted use of weapons of mass destruction, the US department of justice said.

It said plans to attack dams, nuclear power facilities and nightclubs were discovered by US investigators, including a scheme to hide explosive devices in dolls and prams, along with extremist website postings. One read: “It is war … until the infidels leave defeated.”

The 20-year-old Saudi national, Khalid Ali-M Aldawsari, was arrested by the FBI on Wednesday following a tip-off earlier this month when he allegedly attempted to obtain the chemical phenol, a key ingredient in the explosive trinitrophenol or picric acid. After receiving the report, the FBI began an investigation that uncovered Aldawsari’s other purchases of chemicals, including nitric and sulphuric acids, used in bomb-making, along with a journal found at his home that suggested he had long been planning a terrorist attack in the US.

One journal entry describes how Aldawsari sought a particular academic scholarship because it gave him financial help and entry into the US, which he said “will help tremendously in providing me with the support I need for Jihad”.

The entry continues: “And now, after mastering the English language, learning how to build explosives and continuous planning to target the infidel Americans, it is time for Jihad.”

The White House said Barack Obama was notified about the case before Aldawsari was arrested on Wednesday.

Unlike several recent high profile arrests for terrorism-related offences, the justice department was at pains to stress that this was not a sting operation.

Aldawsari travelled from Riyadh to the US on a student visa in October 2008, to study chemical engineering at Texas Tech University, and then transferred this year to South Plains College, also in Texas.

According to the affidavit, Aldawsari emailed himself a document with the subject line “Targets,” said to contain the names and addresses of three former members of the US military who had been stationed at Abu Ghraib prison, notorious for the abuse suffered by Iraqi prisoners there at the hands of US soldiers.

In other documents Aldawsari allegedly recorded the names of dams in Colorado and California, and in one email to himself — titled “NICE TARGETS” — he listed hydroelectric dams and nuclear power plants. On 6 February, according to the affidavit, Aldawsari sent himself an email titled “Tyrant’s House” containing the address of George Bush’s home in Dallas.

Aldawsari will make his first appearance in court in Lubbock, Texas, on Friday. If convicted he faces a maximum sentence of life in prison.