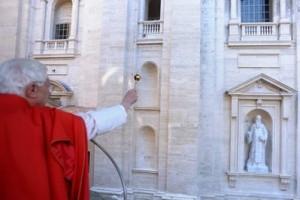 The statue of Saint Maroun was unveiled at Saint Peter’s square at the Vatican on Wednesday during a ceremony attended by President Michel Suleiman, Maronite Patriarch Nasrallah Sfeir and Pope Benedict XVI. The statue of St. Maroun is the 12th and last statue.

A large number of Lebanese MPs, officials and former lawmakers also attended the event which was followed by a mass held by Sfeir.

After the mass, a luncheon banquet was held in Suleiman’s honor by the Maronite Diaspora Institution, during which he stressed the importance of dialogue and implementing the Taif Accord.

He also highlighted the ties between Maronites and Christians with other sects in Lebanon, as well as the need to protect Lebanon as an example of dialogue and coexistence between sects.

Suleiman is scheduled to meet with Pope Benedict on Thursday.

The five-meter-tall statue was sculpted by an Italian artist and was donated by the late Antoine Shoueiri’s family at a cost of 500,000 euros, sits alongside several other figures of saints.

Saint Maroun was a 5th century monk who after his death was followed by a religious movement that became known as the Maronites. St. Maroun was known for his missionary work, healing and miracles, and teachings of a monastic devotion to God. He was a priest that later became a hermit. His holiness and miracles attracted many followers and drew attention throughout the empire.

Maroun is considered the Father of the spiritual and monastic movement now called the Maronite Catholic Church. This movement had a profound influence in Lebanon. St. Maroun spent all of his life on a mountain in Syria. It is believed that the place was called “Kefar-Nabo” on the mountain of Ol-Yambos, making it the cradle of the Maronite movement .

The Maronite movement reached Lebanon when St. Maroun’s first disciple Abraham of Cyrrhus who was called the Apostle of Lebanon, realised that there were many non-Christians in Lebanon, so he set out to convert them to Christianity by introducing them to the way of St. Maroun. The followers of St. Maroun, both monks and laity, always remained faithful to the teachings of the Catholic Church. St. Maroun’s feast day is celebrated on February 9.

After his death in the year 410, his spirit and teachings lived on through his disciples. He is buried in Brad village, north of the Syrian city of Aleppo.