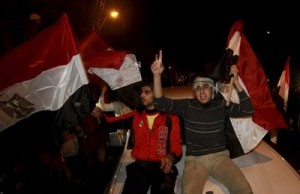 Egyptians carried their party into a second day as they sang, danced and cheered in ecstasy over the fall of former President Hosni Mubarak.

Even as people rejoiced, the Egyptian army took steps to reassure the world of an orderly transition, and the foot soldiers of the revolution that ousted Mubarak debated how the military should move to meet the pledges of greater democracy and an end to emergency rule.

The military said Egypt remained committed to its peace treaty with Israel and called for the reshuffled government appointed by Mubarak after demonstrations began to stay in place until a new body can be formed. With the brief announcement by Mubarak’s Vice President Omar Suleiman that Mubarak had handed his power over to the military Friday, the army now faces the major task of shepherding a transition to free and fair elections.

A coalition of pro-democracy activists who helped launched the Jan. 25 demonstration in Tahrir Square that ultimately proved Mubarak’s undoing told a press conference they had faith in the army to lead a transition. They called for a party in Tahrir Square in a week’s time to honor the popular uprising. But even as they spoke, their rambunctious coalition of youth organizers and Islamists showed cracks as a woman started shouting that the revolution had been hijacked and people yelled back and forth.

In Tahrir Square debates raged as some speakers called for the demonstrators to stay camped out until the army took clear steps on elections and a new constitution, setting up a transitional government and dissolving the old parliament. Others disagreed and said now was the time for people to go home and return to their ordinary lives.