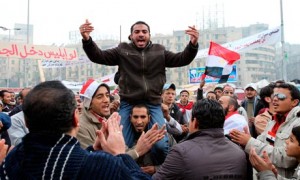 A joyous night in Cairo. What bliss to be alive, to be an Egyptian and an Arab. In Tahrir Square they’re chanting, “Egypt is free” and “We won!”

The removal of Mubarak alone (and getting the bulk of his $40bn loot back for the national treasury), without any other reforms, would itself be experienced in the region and in Egypt as a huge political triumph. It will set new forces into motion. A nation that has witnessed miracles of mass mobilisations and a huge rise in popular political consciousness will not be easy to crush, as Tunisia demonstrates.

Arab history, despite appearances, is not static. Soon after the Israeli victory of 1967 that marked the defeat of secular Arab nationalism, one of the great Arab poets, Nizar Qabbani wrote:

Corn ears of the future,

You will break our chains.

Kill the opium in our heads,

Don’t read about our suffocated generation,

We are a hopeless case,

As worthless as a water-melon rind.

Don’t read about us,

We are a nation of crooks and jugglers.

Corn ears of the future,

You are the generation that will overcome defeat.

How happy he would have been to see his prophecy being fulfilled.

The new wave of mass opposition has happened at a time where there are no radical nationalist parties in the Arab world, and this has dictated the tactics: huge assemblies in symbolic spaces posing an immediate challenge to authority – as if to say, we are showing our strength, we don’t want to test it because we neither organised for that nor are we prepared, but if you mow us down remember the world is watching.

This dependence on global public opinion is moving, but is also a sign of weakness. Had Obama and the Pentagon ordered the Egyptian army to clear the square – however high the cost – the generals would have obeyed orders, but it would have been an extremely risky operation for them, if not for Obama. It could have split the high command from ordinary soldiers and junior officers, many of whose relatives and families are demonstrating and many of whom know and feel that the masses are on the right side. That would have meant a revolutionary upheaval of a sort that neither Washington nor the Muslim Brotherhood – the party of cold calculation – desired.

The show of popular strength was enough to get rid of the current dictator. He’d only go if the US decided to take him away. After much wobbling, they did. They had no other serious option left. The victory, however, belongs to the Egyptian people whose unending courage and sacrifices made all this possible.

And so it ended badly for Mubarak and his old henchman. Having unleashed security thugs only a fortnight ago, Vice-President Suleiman’s failure to dislodge the demonstrators from the square was one more nail in the coffin. The rising tide of the Egyptian masses with workers coming out on strike , judges demonstrating on the streets, and the threat of even larger crowds next week, made it impossible for Washington to hang on to Mubarak and his cronies. The man Hillary Clinton had referred to as a loyal friend, indeed “family”, was dumped. The US decided to cut its losses and authorised the military intervention.

Omar Suleiman, an old western favourite, was selected as vice-president by Washington, endorsed by the EU, to supervise an “orderly transition”. Suleiman was always viewed by the people as a brutal and corrupt torturer, a man who not only gives orders, but participates in the process. A WikiLeaks document had a former US ambassador praising him for not being “squeamish”. The new vice president had warned the protesting crowds last Tuesday that if they did not demobilise themselves voluntarily, the army was standing by: a coup might be the only option left. It was, but against the dictator they had backed for 30 years. It was the only way to stabilise the country. There could be no return to “normality”.

The age of political reason is returning to the Arab world. The people are fed up of being colonised and bullied. Meanwhile, the political temperature is rising in Jordan, Algeria and Yemen. Guardian