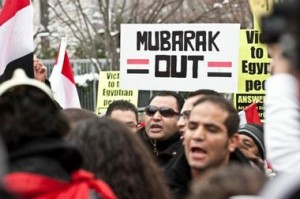 Egypt’s vice-president has made an announcement saying that President Hosni Mubarak has stepped down.

The brief announcement from Omar Suleiman came after a day of uncertainty in Egypt, with raging protests in Cairo and other cities.

The announcement came on the 18th day of demonstrations by protesters who were determined to oust Mubarak from office.

“It’s not just the people in the square it’s everyone in this area — people who aren’t even down in that square are cheering, they are honking horns, it is an incredible scene here right now especially given what’s gone on the last two weeks, there’s been so much tension down there and now it’s like a wave of joy coming out of that square and its unbelievable,” Seemungal said from Cairo on Friday.

Alessandro Bruno, the deputy editor of the North African Journal, said the protesters had been waiting for this moment and had expected it Thursday, when Mubarak addressed the Egyptian people on television.

“This is what they should have heard last night and it was obvious then that Mubarak was reluctant to deliver the statement himself and that the intelligence from yesterday was correct,” Bruno told CTV News Channel during an interview in Toronto, moments after the Friday announcement.

Earlier Friday, Mubarak had reportedly traveled to the Red Sea resort town of Sharm-el-Sheikh, about 400 kilometres from Cairo. CTV