Hariri says he accepts the principle of alternation of power 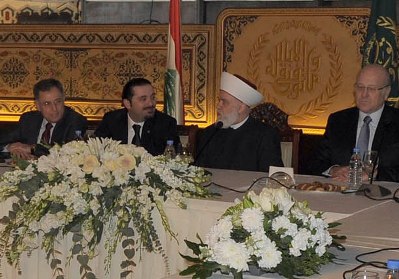 Outgoing caretaker Prime Minister Saad Hariri was quoted by MTV as saying during Dar al-Fatwa’s meeting on Thursday:“We accept the principle of alternation of power.”

Hariri then outlined what really happened recently that led to the current situation and said the disputes are linked to three issues:

1-Domination through power, this is a possible reference of Hezbollah arms which were used against the Lebanese people and institutions on several occasions starting in 2006

2 – Denial of parliamentary election results, this is a possible reference to the alleged threats against MP Walid Jumblatt who, along with his parliamentary bloc had the decisive vote in the naming of PM designate. Jumblatt and his bloc won the 2009 elections as part of March 14 alliance

The “expanded Islamic meeting” at Dar al-Fatwa on Thursday afternoon was headed by Grand Mufti of the Lebanese Republic Sheikh Mohammad Rashid Qabbani .

Following the meeting Dar al-Fatwa issued a statement in which it stated that : “All the Lebanese people want to establish a state through a democratic system which guarantees diversity and does not exclude any sect.”

The statement added: “The sense of injustice or exclusion of any group at the national level creates a sectarian conflict within the community. The statement stressed that The Lebanese have adhered to the Special Tribunal for Lebanon as a guarantee to justice and stability.

Hezbollah brought down PM Saad Hariri’s government on January 12 over the Special Tribunal for Lebanon’s ( STL) indictment which is widely expected to implicate Hezbollah members in the assassination of former PM Rafik Hariri in 2005 .

Mikati, who was backed by Hezbollah and its March 8 allies including MPs Walid Jumblatt and Mohammad Safadi, was appointed by president Michel Suleiman as PM-designate to form and head the next cabinet , giving Hezbollah and its allies increased leverage in the country and provoking widespread protests.

Mikati has called on all Lebanese parties to join his upcoming cabinet, but March 14 parties have said that they will not take part in a cabinet headed by a March 8 before Mikati first clarifies his stance on illegal weapons and the UN-backed tribunal.