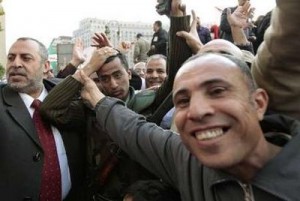 The rain earlier in the day failed to dampen the spirits of the crowd as darkness fell.

Families streamed into the square and one man, entering for what he said was the first time since the protests began January 25, said he wouldn’t leave.

“It’s definitely a feel of celebration but also anxiousness, and not knowing what this announcement will actually say,” said Gigi Ibrahim, a protester in the square. “Nevertheless, it will be a huge victory for revolution, which is demanding for Mubarak to step down as a first demand. And if that actually happens, it would be an amazing, amazing victory.”

Drums and music played as a lone protester stood on a pole above the crowd waving two Egyptian flags and holding his fingers up in a sign of victory.

There was still a note of caution, however. A man on a loudspeaker, addressing hundreds in his corner of the square, promised not to leave until the protesters’ demands have been met they receive an official statement from the regime.

Ibrahim also said the protests would continue until a new regime — not just a new president — is in place.

“I really believe that until then, those protests, whether they’re at Tahrir or outside of Tahrir, they will not stop and they will continue,” she said.