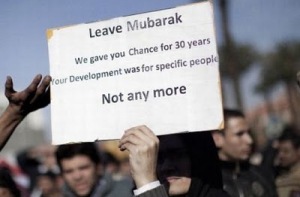 As David Kirkpatrick, The Times bureau chief in Cairo, reports: “Egyptian government officials said on Wednesday that the protests had spread to the previously quiet, southern region of Upper Egypt, with thousands protesting Tuesday in the city of Wadi El Jedid.”

Along with the comment, “Security back to killing, just not in Cairo,” Evan Hill, a Web journalist for Al Jazeera, posted a link on Twitter to an Agence France-Presse report on the violence in Wadi El Jedid, which said that three people had died on Wednesday of wounds sustained the day before.

Citing a security official, AFP reported that “at least three people died and 100 were wounded in two days of clashes between police and political demonstrators,” after “police fired live rounds Tuesday.” AFP added:

On its Egypt live blog, Al Jazeera English notes that the Egyptian newspaper Youm7 reported that the violence “continued until early hours of this morning.”

The Egyptian newspaper’s report also said that 40 people had been treated for gunshot wounds and showed photographs of wounded protesters and a man holding bullets.

Following strikes and demonstrations in towns and cities across Egypt on Tuesday, a reporter touring rural areas on Egypt found that the Mubarak regime seems to be losing support in the countryside as well. On Wednesday Yasmine Saleh reported from the Nile Delta for Reuters:

The protests may have begun with an educated youth and liberal, urban elite, but a tour of the Nile Delta suggests discontent is more widespread. Mubarak’s government needs to do more than meet the aspirations of the middle class.

“The ideas the youths called for in their revolution express those of all Egyptian people, including farmers and residents of rural areas who, like the rest of Egyptians in big cities, face the same needs and suffering,” said analyst Nabil Abdel Fattah.

“New media, mainly satellite channels, have managed to spread the message of the revolution everywhere, including rural areas,” said Abdel Fattah of the Al Ahram Centre for Political and Strategic Studies.

In the countryside the poverty is often grinding. About 40 percent of Egypt’s 80 million people live on less than $2 a day. The provinces have often been seen as backwaters where the status quo was accepted and the demands of a subsistence existence trumped any call for change.

Farm owner Rafeat Suweilam, in his 50s, suggests otherwise. “The youth revolution is a great thing. They want the whole system to leave and so do I. This system only included thieves and bribed people, they should all go away — and now,” said Suweilam, who has a second job working for Telecom Egypt, the mostly state-owned landline monopoly. NYT