Muslim Brotherhood: The young people led the Egyptian revolution, not us 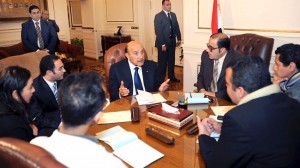 Egypt state television is reporting that Suleiman is offering the groups concessions, including freedom of the press, term limits to the presidency and the end of the country’s emergency law.

The Muslim Brotherhood, which was outlawed in Egypt in 1954, did not send high-level leaders to the meetings, but said they agreed to go to test the government’s intentions: to see if it is serious about reforms or if this is just an act.

After the meeting, I spoke with Dr. Khalil el-Gazar of the Muslim Brotherhood high council.

El-Gazar said the Muslim Brotherhood “were surprised” during today’s historic first meeting with the government when Suleiman stood for a minute to respect those killed in this revolution.

El-Gazar told me Suleiman said the government was wrong for what they did in the uprising and in the past.

During the meeting Suleiman promised to stop harassing anti-government protesters and not pursue or punish them. This may help thin the crowds in Liberation Square, because many are afraid to leave in case the government hunts them down.

He also said there must be peace in the Palestinian state.

In my exclusive interview with President Hosni Mubarak earlier this week, he blamed the Muslim Brotherhood for the violence in Tahrir Square during the protests.

He said it was the young people who led the revolution in Egypt, not the Muslim Brotherhood.

Photo: Egyptian Vice President Omar Suleiman met with representatives from Egypt’s opposition groups, including the banned Muslim Brotherhood. He offered concessions, including freedom of the press, term limits to the presidency and the end of the country’s emergency law.