Egypt protesters: “We are not leaving, you are leaving

Tens of thousands of anti-government demonstrators rallied peacefully in the center of Egypt’s capital Friday, demanding their president step down after days of protest and violence that have shaken the Arab world. 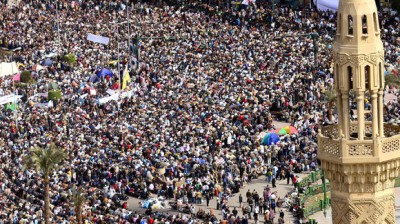 Tens of thousands of anti-government demonstrators rallied peacefully in the center of Egypt’s capital Friday, demanding their president step down after days of protest and violence that have shaken the Arab world.

“Leave! Leave!” protesters roared, pumping their fists at the end of Friday prayers. “We are not leaving. You are leaving,” they yelled, drowning out the drone of a helicopter overhead.

Nationalist songs blared from speakers in Cairo’s Tahrir Square, and thousands of people poured in through lines of razor wire rolled out by the Egyptian army to control protests that had been advertised as marking President Hosni Mubarak’s “day of departure.”

“Where are you, freedom? Mubarak is standing between us,” they chanted thunderously.

“He is going to leave!” others bellowed.

Even as plainclothes police harassed foreigners and anti-government demonstrators at checkpoints around the city, the army was preventing anti-Mubarak demonstrators from approaching the square after two days of pitched battles by Egyptians hurling rocks and firebombs.

Top government officials appeared to be positioning themselves for a transition.

Gen. Mohamed Tantawi, the defense minister who also is a close advisor to Mubarak, came to the square to inspect soldiers. Amr Moussa, secretary general of the Arab League, often mentioned as a possible candidate in presidential elections in September, also visited.

“Tantawi and Moussa are trying to reach out to protesters, and act as intermediaries between protesters and the opposition on one side and the regime on the other,” said Diaa Rashwan, an analyst with Al Ahram Center for Political and Strategic Studies. “This was proved by Tantawi’s calls for the Muslim Brotherhood to agree to enter negotiations with the regime.”

The moves by Tantawi and Moussa would have been unthinkable a week ago. But they came a day after newly appointed Vice President Omar Suleiman offered a number of conciliatory gestures, including a guarantee that Mubarak’s son, Gamal, would not run for president.

Suleiman is proposing to meet Saturday with opposition leaders, including Nobel Peace Prize winner Mohamed ElBaradei and university professor Ayman Nour, to discuss a possible solution: Mubarak would remain in office as a symbolic president while handing official power to Suleiman prior to elections. Such a move, said Rashwan, could provide a face-saving way for Mubarak to step aside.

Nour, who ran for president against Mubarak in 2005 and was later jailed, said groups were debating the offer. The Muslim Brotherhood, the largest opposition group, had been dismissive of the olive branch but also confirmed the sides were discussing whether negotiations could start.

A deal would hinge on whether Mubarak resigns from his ruling National Democratic Party, even if he stays in office until September, both Nour and a Muslim Brotherhood spokesman said.

It appeared to many that Egypt’s ruling figures had lost their bearings, offering concessions that now are too little and using repressive tactics that no longer work.

“It is a political striptease, where Mubarak throws off garment after garment,” said Hisham Kassem, a political analyst. “Mubarak is dealing as if his government is still strong. But he doesn’t realize the old methods no longer work.”

Kassem predicted it was only a matter of time before Egypt’s military brass, worried about deeper divisions in Egyptian society and more economic damage, moved to dump Mubarak.

“It is a waiting game,” Kassem said “[The military] will have to handle the mess when he is gone.”

‘We are not leaving. You are leaving,’ demonstrators in Cairo’s Tahrir Square yell. Top government officials appear to be positioning themselves for a transition of power.

So far, Mubarak, 82, has refused to cede power, even in the face of strong prodding by the White House to ease tensions quickly. Some officials said he wouldn’t.

Prime Minister Ahmed Shafik, in remarks made on state television Friday and rebroadcast by the Al Arabiya network, predicted Mubarak probably would not turn over power to Suleiman. “We need the president for legislative reasons,” Al Arabiya quoted Shafik as saying.

Get dispatches from Times correspondents around the globe delivered to your inbox with our daily World newsletter. Sign up »

At sunset, 2,000 pro-Mubarak protesters rallied elsewhere in the city, waving posters of their president.

Calm reigned in Tahrir Square. The highway overpass where earlier in the week pro-Mubarak demonstrators rallied was empty. A robust military presence guarded the flashpoint.

People gathered in a circle and danced, clapped and sang, hopeful that victory was near. A band with an electric guitar played a faux reggae song, called “Get Out, Get Out Hosni Mubarak.”

In the meantime, the anti-Mubarak crowds kept up their defenses in case any sudden danger materialized.

On a side street, men made ready to make their stand on a street lined with travel agencies, airline offices and a Mobil gas station. The first line of defense was a barricade assembled from a wrecked blue police bus and a mass of torn-up metal railings and sheet metal. Fifty yards down the street, the defenders lined up in ranks five deep, some clutching wooden clubs.

“Nobody knows what will happen here,” said Said Khirallah, a 52-year-old school administrator and a father of three. “We are peaceful, but we will defend this square with our bodies.

“The Egyptian citizen is humiliated. I want a free country for my kids, and this is a way to find our dignity again.”