Night of violence pushes Egypt to a dangerous new stage 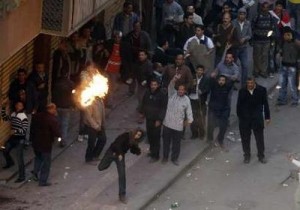 Molotov cocktails flared in the night as supporters of Egypt’s Hosni Mubarak clashed in central Cairo with demonstrators demanding an immediate end to his autocratic 30-year reign.

Mubarak loyalists rode horses and camels yesterday into Tahrir Square, the epicenter of anti-government protests since Jan. 25, swinging whips and clubs. The two sides hurled rocks, bottles and concrete chunks, sometimes from rooftops, and some pro-government marchers carried machetes. Egyptian soldiers didn’t intervene, except to use water cannon to extinguish fires, and there were no uniformed police present.

More than 600 people were injured and at least three killed in the clashes, according to state television, as the nine-day crisis formed into battle lines, with government supporters challenging the demonstrators who reject Mubarak’s plan to remain in power until September elections.

In Washington, White House press secretary Robert Gibbs stopped short of blaming the Mubarak regime but said “if any of the violence is instigated by the government, it should stop immediately.”

“There is the potential for this to get out of hand but I think the military would step in before there was a civil war,” said Barak Seener, a research fellow at the London-based Royal United Services Institute for Defence and Security Studies. “I wouldn’t go so far as to say Mubarak engineered these clashes, but they feed into his narrative that he is needed for stability.”

Gibbs said it is “imperative” that Egyptians see a government transition begin without delay. This is “not some process that starts a week, a month or several months from now,” Gibbs said. “Now means now.”

Newly appointed Vice President Omar Suleiman, who has been Mubarak’s intelligence chief, issued a statement yesterday calling on demonstrators to go home so that order may be restored and transition talks can progress. It wasn’t clear from his statement whether he was setting a pre-condition for talks with opposition leaders of the anti-Mubarak movement.

The cost of protecting Egyptian debt against default for five years with credit-default swaps widened 40 basis points, or 0.40 percentage points, to 382 yesterday, according to prices from CMA, a data provider in London. The yield on the North African nation’s 5.75 percent debt due in April 2020 increased 13 basis points to 6.63 percent at 4:06 p.m. yesterday in London, according to Bloomberg composite prices.

Persian Gulf shares rose on Mubarak’s announcement of a departure date and rising oil prices, sending Dubai’s benchmark index up the most in almost 10 months. The Bloomberg GCC 200 Index of Gulf shares climbed 1.8 percent yesterday, the most since May. Most Gulf trading closed before the new clashes in Cairo.

State television blamed the Muslim Brotherhood and Hamas, an allegation at odds with the sequence of events that began with organized crowds of men carrying pro-regime banners confronting anti-Mubarak demonstrators. CNN reported that the first Molotov cocktails were thrown from within the ranks of pro-government forces.

Mohamed ElBaradei, an opposition leader and former United Nations diplomat, told the BBC the army should move in to end unrest incited by a “criminal regime” that “has to go immediately.”

Crowley said the U.S. doesn’t know who is behind attacks on protesters in Cairo. “Whoever they are, there needs to be accountability here,” Crowley said. “This was clearly an attempt at intimidating the demonstrators.”

“The protests won’t stop until he leaves or is ousted,” said Rime Allaf, associate fellow of the Middle East and North Africa Programme at London’s Chatham House. “The opposition is clear that they want the fall of the regime, not just Mubarak.”

“The Middle East may never be what it was pre the last 10 days, and what it will be is yet to be determined,” White House Chief of Staff William Daley said in an interview yesterday. “This is not some little nation, this is a major country not only in numbers, but in history in the Middle East.”

Mubarak, 82, indicated Feb. 1 that the government would take steps to try to return the country to normal, including dispatching police to apprehend those responsible for arson and other illegal actions in the past week of protests. Egypt “faces a choice between chaos and stability,” Mubarak said.

“My first responsibility now is to restore the security and stability of the nation to achieve a peaceful transition,” he said in a televised address promising to step down after elections due in September.

Service providers including units of Vodafone Group Plc “returned to the Internet” at 11:29 a.m. in Cairo, Web security firm Renesys said in a blog post. Communications had been cut off during the protests. Some banks’ automated teller machines are working, and 24,000 government employees received their salaries, state television said.

All Egyptian ports are closed because of a lack of staff, though the Suez Canal is operating as normal, Inchcape Shipping Services reported yesterday.

Crude edged up in New York and Brent oil climbed to a 28- month high on Wednesday amid concern that protests in Egypt may threaten exports from the Middle East.

Crude oil for March delivery settled at $90.86 a barrel on the New York Mercantile Exchange. It climbed as much as 1.1 percent earlier yesterday. The contract touched $92.84 on Jan. 31, the highest intraday price since Oct. 7, 2008. Futures are up 18 percent from a year ago.

“Everyone is watching television and the market is moving on the most recent pictures from Egypt,” said Carl Larry, president of Oil Outlooks & Opinions LLC in Houston. “The price of crude will trend higher until we get some kind of resolution to the crisis.”

“There is a real risk that it will spill over” into the economy, Stiglitz said in an interview yesterday on Bloomberg Television’s “In the Loop” with Betty Liu. “It’s only when the oil exports get affected that the effect will become very significant.”

Obama said on Feb. 1 that he has urged Mubarak to start the handover process immediately and not to wait until September elections. His envoy to Mubarak, ex-Ambassador Frank Wisner, remains in Cairo.

That message was repeated publicly yesterday by top administration officials. “The Egyptian people need to see change,” Gibbs said. That means “concrete action” by the government to make changes demanded by Egyptian citizens.

Egypt received about $1.5 billion in U.S. assistance last year. It has been one of the biggest recipients of U.S. aid since 1979, after Egypt signed a U.S.-brokered peace treaty with Israel. Mubarak has backed efforts to encourage Arab acceptance of the Jewish state, oppose Iran’s nuclear program and isolate Hamas, the Islamist militant group that controls the Gaza Strip.