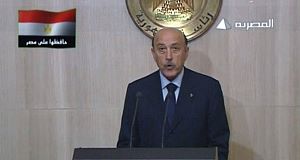 Egyptian Vice President Omar Suleiman blamed foreigners and political opponents within the Muslim Brotherhood for 10 days of turmoil that has rocked the nation and cost Egyptians at least $1 billion in lost tourism revenue.

“When there are demonstrations of this size, there will be foreigners who come and take advantage and they have an agenda to raise the energy of the protesters,” Suleiman said i

In an interview on state-run television, the No. 2 figure in the leadership of President Hosni Mubarak appeared to take a harder line against regime opponents than did Prime Minister Ahmed Shafiq, who had apologized for a day of brutal attacks on anti-government protesters Wednesday and promised to punish the “infiltrators.”

Suleiman told journalists he had invited the Muslim Brotherhood to enter negotiations with the government. He said the Brotherhood remains “hesitant” but underlined that it was a “valuable opportunity” for the fundamentalist movement.

The Brotherhood, which calls for an Islamic state in Egypt, is the top political opponent of Mubarak’s regime, which has always rejected any contact with the group and has launched heavy campaigns of arrests against it over past year.

The Brotherhood is among the many disparate anti-Mubarak groups organising the protests, though secular activists have so far dominated the movement. All have rejected any dialogue with the government before Mubarak steps down.

Al Jazeera news agency observed in a commentary that the embattled leadership was adopting a classic “good cop, bad cop” approach to the unrest paralyzing Egypt, with Shafiq seeking to assure protesters that their concerns are being addressed and Suleiman threatening consequences if the disruptions continue.

“Clearly, the Mubarak regime is trying to regain the initiative by either encouraging or directly spreading chaos, confusion and insecurity — in order to gain the middle ground as the guarantor of national security and stability,” the news agency said on its English-language website.

Suleiman said the protests had chased a million tourists out of Egypt in recent days and cost the key industry at least $1 billion — a warning about the widening economic damage likely to turn tourism workers against the demonstrators.

The vice president appointed by Mubarak five days ago told the protesters to “go home” and let the army and police do their jobs in restoring order in the Middle East’s most populous country.

Suleiman rejected demands for President Hosni Mubarak’s resignation, saying it would be “a call to chaos.”

Such a resignation “is a very alien philosophy to the ideology of the people,” he said. “We all respect the leader, Hosni Mubarak, and what he has offered the country over the past 30 years and the service he has rendered.”

“To step down would be a call to chaos,” he said

Suleiman called upon protesters to end their week-long demonstrations.

“Go back home,” he said “Leave the officials to respond to your demands in order to save time.”