by yalibnan
614
President HosniI Mubarak sees the military as his only hope as the other pillars of his establishment crumble
Share: 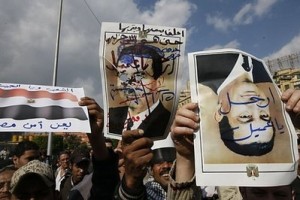 Egypt’s military wants to survive, not to be swept away in what looks like the imminent collapse of President Hosni Mubarak’s ruling apparatus.

So will the generals hasten his exit as their Tunisian counterparts did in persuading former President Zine al-Abidine Ben Ali to flee the country on Jan. 14 after weeks of protests?

The armed forces’ response to the earthquake of unrest shaking Egypt for the past six days has been ambivalent.

Troops now guard key installations after police lost control of the streets, but have neglected to enforce a curfew and have often fraternized with protesters, rather than confronting them.

Asked to explain, one soldier said: “These are written by the people. It’s the views of the people.”

Among the many imponderables of the extraordinary turmoil is a possible disconnect between the generals in Mubarak’s circle and the sentiments of the soldiers on the streets.

“It’s one of those moments where, as with the fall of communism in Eastern Europe, it can come down to individual lieutenants and soldiers to decide whether they fire on the crowd or not,” said Rosemary Hollis, Middle East expert at London’s City University.

Mubarak, clinging to power as his legitimacy vaporizes, on Saturday named his intelligence chief, Omar Suleiman, a former military man, as vice-president, a post vacant for 30 years.

But it remains to be seen whether the military men now in charge will keep the 82-year-old Mubarak in power, or decide he is a liability to Egypt’s national interests — and their own.

Egyptians tend to revere the military, less associated with daily repression than the police and security agencies, which leaked U.S. diplomatic cables say have grown into a vast force of 1.4 million since the failed Islamist revolt of the 1990s.

Yet the crowds flooding the streets clearly have no desire to see Mubarak’s three decades of authoritarian rule replaced by a military line-up featuring his closest cronies.

Mubarak met his top commanders on Sunday, state television showed, in another indication that he sees the military as his only hope as the other pillars of his establishment crumble.

His widely discredited political machine, the National Democratic Party, symbolically went down in flames when demonstrators torched its Cairo headquarters on Friday.

A business elite, seen as the main beneficiary of Egypt’s liberal economic reforms, can offer no bulwark against the outpouring of anger fuelled by the government’s failure to listen to popular political, economic and social grievances.

The military is notoriously opaque. Reporting on it remains taboo, even in the much more vibrant media scene that has blossomed in Egypt in recent years. Little is known about its substantial land holdings, huge economic interests or budget.

“The idea that the military remains a key political and economic force is conventional wisdom here,” said a U.S. diplomatic cable from July 2009 released by WikiLeaks on Friday.

“However, other observers tell us that the military has grown less influential, more fractured and its leadership weaker in recent years,” the cable from the U.S. embassy in Cairo said.

Nevertheless, the military may see its duty now as ensuring an orderly transition to an undefined new political order. Reuters